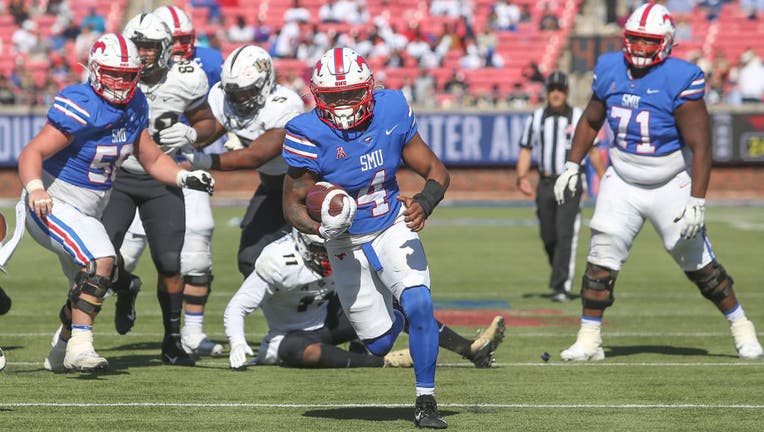 DALLAS, TX - NOVEMBER 13: Southern Methodist Mustangs running back Tre Siggers (4) runs to the end zone for a touchdown during the game between SMU and UCF on November 13, 2021 at Gerald J. Ford Stadium in Dallas, TX. (Photo by George Walker/Icon Spo

Ryan O'Keefe pulled in an 18-yard pass from Mikey Keene and Parker Navarro ran in from the 6 to put UCF up 14-7 with 5:33 left in the first quarter but the Mustangs answered with 31 straight points to take a 38-14 advantage at intermission.

Ulysses Bentley IV started the SMU run by stiff-arming his way 56 yards for a touchdown to make it 14-14 and Siggers put the Mustangs in front for good with a 10-yard run for his first score.

Mark-Anthony Richards ran for two touchdowns in the second half for UCF (6-4, 2-3), including a 58-yard dash early in the third quarter. Richards finished with 104 yards on eight carries.

The win snapped a two-game losing streak by SMU. UCF had won three straight coming into the game.