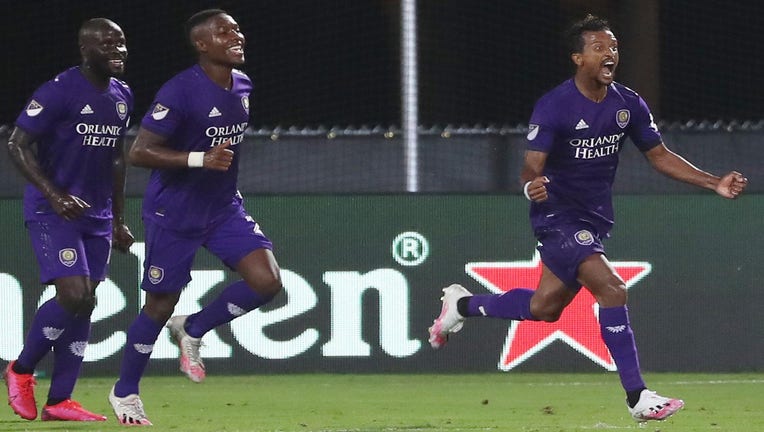 Orlando City's Nani, right, screams in celebration after scoring the winning goal against Inter Miami during the MLS is Back tournament at Disneys ESPN Wide World of Sports in Orlando, Florida, on Wednesday, July 8, 2020. Orlando City won, 2-1. (Step

Players wore black T-shirts, black gloves and black facemasks emblazoned with Black Lives Matter. The shirts had varying slogans that included Black And Proud, Silence Is Violence and Black All The Time.

The players walked toward midfield, raised their right arms one at a time and held the pose so long that some could be seen stretching fatigued muscles afterward.

It was a poignant moment that put two of the nation’s most prominent changes over the last four months — masks and movements — at the forefront of the sport’s return.

The group was formerly called the Black Players Coalition of MLS but changed its name this week to Black Players for Change. Originally announced on Juneteenth, the group started in the wake of George Floyd’s death with the hope of combating systemic racism both in soccer and the players’ communities. The league and the players’ union endorsed the organization.

Several other players from Orlando City and Inter Miami took a knee near midfield during the demonstration. Orlando's Nani scored in the seventh minute of stoppage time and held on for a 2-1 victory over expansion Miami.

The two in-state teams delivered their own moment of silence by taking a knee along with the referee and the line judges just before the opening kick.

The national anthem was not played before or after the demonstration. MLS previously said it would not be played because no fans were in attendance.

Floyd, a Black man, died May 25 after a white Minneapolis police officer pressed his knee on Floyd’s neck for nearly eight minutes. Prosecutors said that a police officer had his knee on the neck of Floyd for 7 minutes, 46 seconds — not the 8:46 that has become a symbol of police brutality.

MLS players had weeks to decide what to do prior to the MLS is Back tournament at ESPN’s Wide World of Sports complex at Disney World.

The league’s teams are sequestered in resorts for the duration of the World Cup-style tournament, which began with a Group A match that was the first meeting between two Sunshine State teams.

Nashville was supposed to play Chicago in the second game of a doubleheader Wednesday but it was postponed.

MLS shut down because of the coronavirus pandemic on March 12, after the league’s teams had each played two regular-season games.

The reboot had a considerably different feel — without fans and with plenty of concern even amid a safety bubble. Can 25 teams that include nearly 700 players plus coaches, trainers and other support staff do everything right for a month? And what’s the threshold for more positive tests?

The NFL, the NBA and Major League Baseball surely have a close eye on what’s happening outside Orlando.

The NBA should get an up-close look. The league already has part of its bubble established at the ESPN venue. NBA team flags fly on every flagpole, and some areas have been sanitized and cordoned off for basketball’s return later this month.

MLS is using three fields near the back of the complex, two of the ones the NFL used for Pro Bowl practices the last four years. The league mandated masks for everyone other than players. Coaches, support staff and media donned masks during the game. Miami star Rodolfo Pizarro, who wasn't in the starting lineup, also wore one during warmups.

Miami’s Andres Reyes left the field on a stretcher early in the second half after a scary collision with Orlando’s Dom Dwyer. Replays appeared to show Dwyer hitting Reyes in the throat as they went for a 50-50 ball.

Reyes had trouble breathing as teammates and the referee called for help. Adding to the growing concern on the field, the emergency crew got hung up trying to gain access to him.

Security personnel struggled to open a gate, delaying the medical team’s response. It was slow enough that one of Reyes’ teammates, Juan Agudelo, ran across the field to help and ended up assisting in pulling the stretcher across the soggy grass.

Chris Mueller scored the equalizer for Orlando, getting a sliding toe on a perfect cross from Nani to the back post in the 70th minute.

Agudelo scored the first goal of MLS’ return, drilling a left-footer past Pedro Gallese to cap a play that started with two teammates on top of each other in the box.