The Dallas Stars and the Nashville Predators will play each other Saturday night for the Stars' home opener at the American Airlines Center. President and CEO Brad Alberts joined Good Day to talk about the new season, new head coach and how it's been working out so far.

Joe Pavelski and Wyatt Johnston also scored and Tyler Seguin added three assists for Dallas, which won its opener for the fourth time in the last five seasons.

"If you were going to draw it up, that’s probably what it would look like… tough building against a real good team," said Stars coach Peter DeBoer, who won in his debut with Dallas. "I thought we had a team effort."

Ryan Johansen scored and Juuse Saros made 25 saves for Nashville. After scoring seven goals in securing two season-opening victories over the San Jose Sharks last weekend in Prague, the Predators could not find a way to beat Oettinger until the third period.

"Well it’s the challenge of the schedule," Predators coach John Hynes said. "We felt the guys had some good energy and things the last couple days, but tonight … We played a team that played very well, but we just didn’t have enough pushback in our game, to get more consistency in the way you need to be able to play to win." 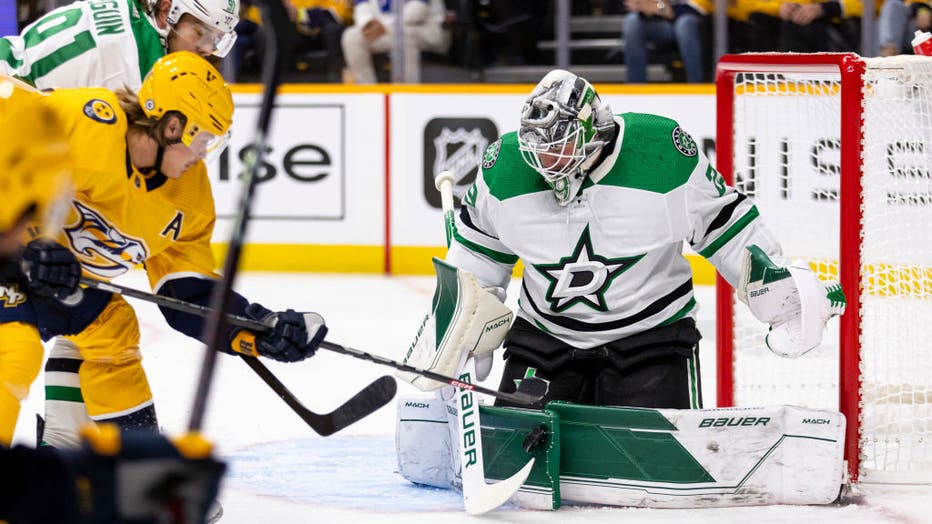 NASHVILLE, TN - OCTOBER 13: Jake Oettinger #29 of the Dallas Stars makes a save on a shot by Mikael Granlund #64 of the Nashville Predators during the first period at Bridgestone Arena on October 13, 2022 in Nashville, Tennessee. (Photo by Brett Carl

Marchment scored the game’s first goal at 2:31 of the first. Seguin blocked Alexandre Carrier’s shot and the rebound came to Marchment in the slot. He carried the puck the length of the ice, sidestepping Roman Josi’s check before beating Saros with a wrist shot.

Dallas made it 2-0 with 1:04 remaining in the period. With the Stars on a power play, Nils Lundqvist got the rebound of Seguin’s shot. He slipped a nifty pass to Marchment on the back door, where he had an easy tap-in for his second of the period.

"I don’t think it could have went better," Marchment said. "We got a big win and I couldn’t have asked for a better start."

Pavelski struck in the final minute of the second, beating Saros from the slot with 50.1 seconds remaining to make it 3-0.

Johnston and Johansen scored 31 seconds apart early in the third. Johnston, making his NHL debut, notched the second Stars power-play goal of the game off of a feed from Seguin, who grabbed the puck for his young teammate. Johnston got his first NHL goal.

"I saw that the play was kind of developing and it seemed like the pass came pretty slow," Johnston said. "I kind of knew there was a wide-open net for me to shoot it in. I just tried to put it right in the middle of the net. It ended up being a little close, but I’m so happy that it went in."

Marchment’s first goal of the game was the fourth-fastest for a player in their first game with the franchise. Only Bob Barlow, Mattias Janmark and Warren Peters found the back of the net more quickly in their debuts with the North Stars/Stars franchise.

With the two-goal effort, Marchment joined some good company in doing so in his Stars debut. Jaromir Jagr was the last Stars player to score twice in his first game for Dallas. Jagr did so Jan. 19, 2013.

Johnston made his NHL debut Thursday night and the 19-year-old scored on the only shot on goal he recorded in the game.

Dallas selected Johnston with the 23rd pick in the 2021 Draft. Last season, he led the Ontario Hockey League in points with 124.

"He’s got a special element to him," DeBoer said.

The Stars have not allowed a power-play goal against to Nashville in their last eight matchups. In killing off all five opportunities the Predators had on the man advantage, Dallas is a perfect 23 for 23 over those games.

Predators: Visit the Stars on Saturday.