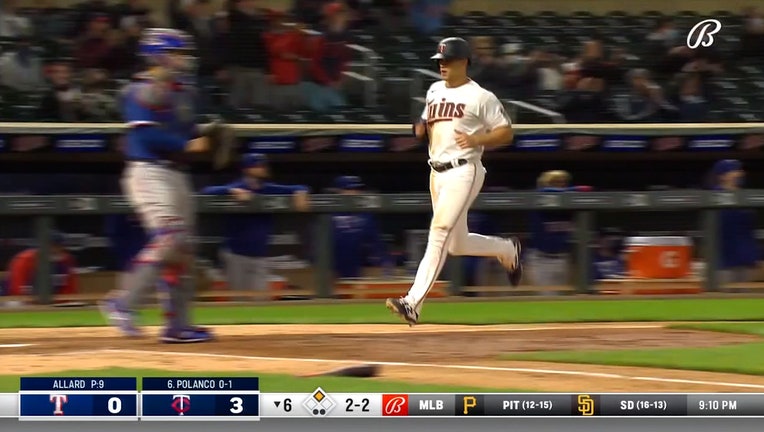 MINNEAPOLIS - Kenta Maeda steered himself back on track by keeping the Texas Rangers scoreless into the sixth inning, and the Minnesota Twins won the opener of a four-game series 6-5 on Monday night.

Maeda (2-2) had a season-high eight strikeouts in 5 1/3 innings, allowing only two singles and two walks in what was by far the best of his six starts this season.

Jorge Polanco had an RBI triple and an RBI double, and rookie Alex Kirilloff kept up his torrid start with two doubles for the Twins. One of them was a two-out, run-scoring line drive to left field in a three-run sixth that came against the left-handed reliever, Kolby Allard, brought in to face him.

Adolis García hit a two-run homer in the eighth inning for the Rangers against Brandon Waddell, who was called up from Triple-A before the game, but Tyler Duffey escaped with a 5-3 lead intact after allowing his inherited runner to score.

Joey Gallo hit a two-out, two-run homer in the ninth against Taylor Rogers, who got his second save by striking out García.

Maybe the biggest mystery of Minnesota's rough first month was the struggle by Maeda, who finished second in AL Cy Young Award voting last year. The Twins weren't publicly worried, though, just hopeful he'd make some adjustments to his off-speed pitches. The right-hander obliged, lowering his ERA from 6.56 to 5.34 while leading the Twins to their fourth victory in five games.

Dane Dunning (1-2) was better than his last two starts for the Rangers, done in by a bit of bad luck and plain old hustle by the Twins while allowing two earned runs in 5 2/3 innings.

Kirilloff used a headfirst slide for his first double in the second inning, went to third on a flyout by Polanco and came around to score on Gallo's errant throw from right field.

Luis Arraez scored on Josh Donaldson's two-out double in the third, when he awkwardly collided with airborne catcher Jose Trevino's legs and leaped up to touch the plate. The players were tangled, but Trevino's glove hand never grazed Arraez, who was later removed with concussion symptoms.

Byron Buxton, who went hitless for only the fourth game this season, was selected the AL player of the month for April. He's the first Twins player to win the monthly award since Delmon Young in July 2010, after batting .426 in 68 at-bats with the best OPS (1.363) for any month in team history.

Rangers: No decision had been made yet on whether RHP Kohei Arihara (sore right middle finger) will need time on the injured list, manager Chris Woodward said. Arihara's next turn in the rotation has already been pushed back. The pitcher will play catch Tuesday to test his finger.

Twins: Starting pitchers for Wednesday and Thursday had yet to be determined, with Michael Pineda hurting a little and Matt Shoemaker struggling a lot. Pineda was hit on the wrist by a batted ball Friday and has experienced some swelling and stiffness since. RHP Randy Dobnak was sent to Triple-A St. Paul for more work, eliminating one option if a fill-in starter is needed.

Twins LHP J.A. Happ (2-0, 1.96 ERA) takes the mound Tuesday night, when Rangers RHP Kyle Gibson (3-0, 2.16 ) makes his first appearance against his longtime team. Drafted in the first round in 2009, Gibson pitched seven seasons in Minnesota before signing with Texas last year. He is the career leader in both wins (32) and losses (36) at Target Field.

The oldest of Gibson's three children, 7-year-old daughter Hayden, assured him prior to the series she would be cheering for him, despite her diehard allegiance to the Twins. She once asked her parents if she could marry Buxton's son, Brix, who is the same age.

"I’ve got to take it easy there, because you never know when that relationship’s going to go farther," Gibson said, when asked if he planned to initiate any friendly ribbing of his former teammates.