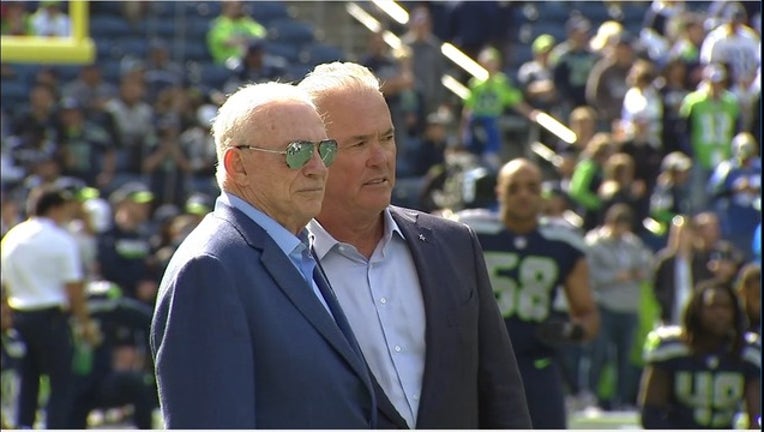 FRISCO, Texas (AP) - The Dallas Cowboys have gambled in the second round a couple of times in recent NFL drafts, taking Randy Gregory knowing off-field issues could affect the defensive end's availability and getting Jaylon Smith when it was almost certain the injured linebacker would not play as a rookie.

Without a first-round pick this year because of the midseason trade for receiver Amari Cooper in 2018, owner and general manager Jerry Jones isn't sure his tendency to reach with his second choice is the best idea this year.

"I think you're operating without a net a little bit," Jones said last week. "If you start going into the second pick with a real question mark as to this coming year's contribution, I think logic would dictate for me slowing down a little bit there."

The Cowboys have the 58th overall pick in the second round and the 90th choice in the third Friday night. At the moment, Dallas has four picks in the final four rounds Saturday.

There's been a lot of talk about safety since the Cowboys weren't serious bidders for Earl Thomas in free agency. It's the position that most sorely lacks a young potential playmaker.

But defensive line could still be a priority even after that spot was involved in the two biggest moves of the offseason. Dallas made star pass rusher DeMarcus Lawrence the highest-paid player in franchise history and acquired Robert Quinn from Miami in a trade.

Executive vice president of personnel Stephen Jones has said the club thinks defensive line is one of the deepest positions in the draft.

Among the top prospects remaining after the first round were safeties Chauncey Gardner-Johnson of Florida and Washington's Taylor Rapp. Ohio State defensive tackle Dre'mont Jones was still available, along with edge rushers Christian Miller of Alabama and Louisiana Tech's Jaylon Ferguson.

The gamble on Smith in 2016 appears to have paid off significantly. After a sluggish debut in his second year coming off a devastating knee injury in his final game at Notre Dame, Smith looked like a future Pro Bowl player last season.

Gregory is on his fourth suspension for multiple violations of the NFL's substance-abuse policy, although the Cowboys are optimistic about his reinstatement before the season. The 2015 second-rounder missed 30 of 32 games in 2016-17 before setting career highs with 14 games and six sacks last season.

It hasn't always been about gambling in the second round for Dallas.

Guard Connor Williams started as a rookie last season, a year after the Cowboys took cornerback Chidobe Awuzie, who appears to have established himself as a starter. Dallas traded up to get Lawrence early in the second round five years ago.

The Cowboys believe their offseason moves will allow them to avoid drafting for need in the second round.

"That's typically when you draft the worst players because you see this blatant need and unfortunately consciously or subconsciously that can impact the whole evaluation process," coach Jason Garrett said. "I think we've done a really good job deciding what kind of team we want to have."