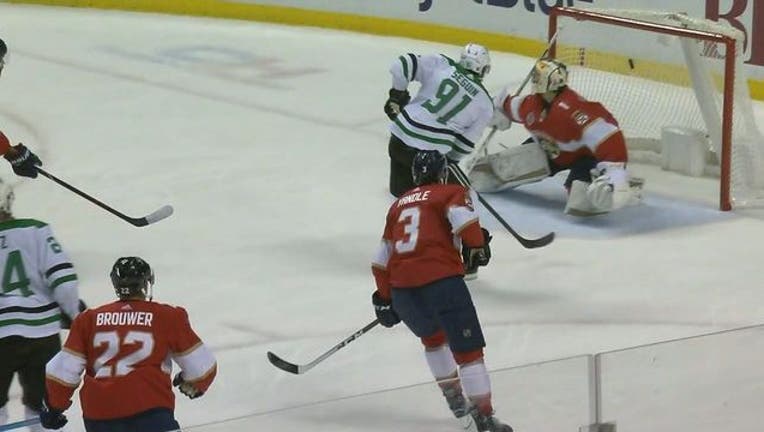 SUNRISE, Fla. (AP) - Anton Khudobin recorded his second shutout of the season and Tyler Seguin had two goals and an assist as the Dallas Stars beat the Florida Panthers 3-0 Tuesday night.

Esa Lindell also scored, and Alexander Radulov had two assists for Dallas, which snapped a two-game losing streak and won for the sixth time in eight games.

With Stars goalie Ben Bishop out, Khudobin made his third consecutive start, stopping 30 shots and winning for just the second time in six starts. It was the eighth shutout of Khudobin's career.

Roberto Luongo recorded 16 saves for Florida, which lost its second straight, both at home at the start of a seven-game homestand. The Panthers were shut out for the first time this season - the last team in the NHL to be blanked.

Seguin finished off a give-and-go with Roope Hintz at 11:47 of the first period, streaking through the slot and chipping in his 23rd goal for a 1-0 lead. The center's goal gave him six in eight games.

The teams played a similar 20 minutes in the second period, with few scoring chances.

Khudobin kept Florida off the board early in the second when he stuffed Jonathan Huberdeau at 3:45 after Frank Vatrano's slick pass caught the winger skating through the slot alone for a point-blank shot.

Jamie Benn's pass from behind Luongo's goal found Seguin in the right circle. The center then recorded his second point after Lindell fired in his eighth goal at 12:39.

The Stars put up just five shots in the second, giving them 12 for the contest. Khudobin thwarted all 12 in the period and the Stars led 2-0 at the second break.

Seguin scored an empty-net goal at 17:48 for the final margin.

NOTES: Bishop (upper body) missed his third straight game, but coach Jim Montgomery said his No. 1 goalie could return for the Stars against Tampa Bay on Thursday. . D Roman Polak returned to the lineup after leaving Saturday's game in Arizona following a hard hit. Polak practiced, said he felt fine to play and was paired with rookie Miro Heiskanen. . Right wing Valeri Nichushkin started on the fourth line after being scratched the last three games. . Florida LW Jamie McGinn (back surgery) made his first appearance of the season playing on the fourth line with C Riley Sheahan and RW Troy Brouwer. . Center Vincent Trocheck has five points in his 10 games since a 27-game absence for a broken ankle, but just one in his last seven.

Stars: At Tampa Bay on Thursday.