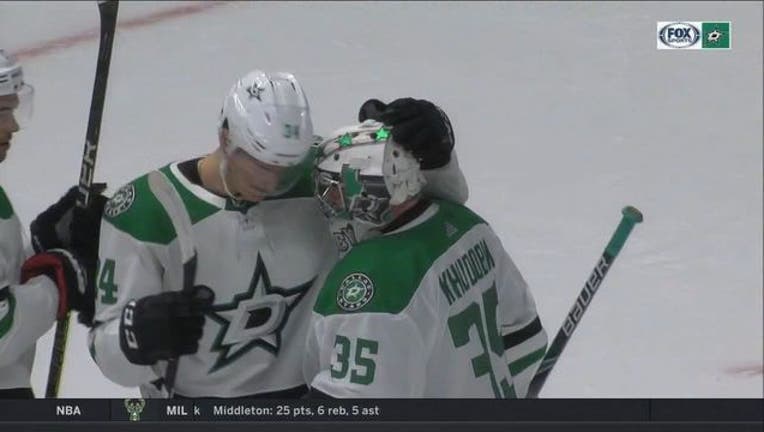 NASHVILLE, Tenn. (AP) - Anton Khudobin made a career-high 49 saves to lead the Dallas Stars to a 2-0 victory over the slumping Nashville Predators on Thursday night.

Tyler Pitlick and Mattias Janmark scored for Dallas, which has won two of three.

Pekka Rinne stopped 28 shots for the Predators, who have lost five straight.

Khudobin posted his first shutout of the season and seventh of his career. He was tested often, with his best save coming with six minutes remaining when he denied Ryan Johansen's slap shot from the right side with Nashville on a power play.

Pitlick scored the first goal at 7:20 of the opening period.

After a give-and-go with linemate Radek Faksa, Pitlick used Predators defenseman Matt Irwin as a screen and beat Rinne with a wrist shot from the left circle to the far side.

Janmark's unassisted goal at 11:09 of the second doubled the Dallas lead.

Irwin could not control a bouncing puck at the Stars blue line and Janmark carried it the other way. From the top of the left faceoff circle, Janmark pulled up and fired a slap shot on net. The puck deflected off Rinne's glove and trickled across the goal line.

The banged-up Predators got two players back in the lineup. Star defenseman P.K. Subban missed 19 games with an upper-body injury and forward Viktor Arvidsson missed 21 games with a broken thumb. Both were activated off injured reserve.

NOTES: Dallas is 15-1-1 when leading after two periods this season. ... Pitlick has scored in consecutive games for the first time this season. ... Nashville RW Ryan Hartman played his 200th NHL game. ... The Predators have not scored on the power play in nine of their last 10 games.