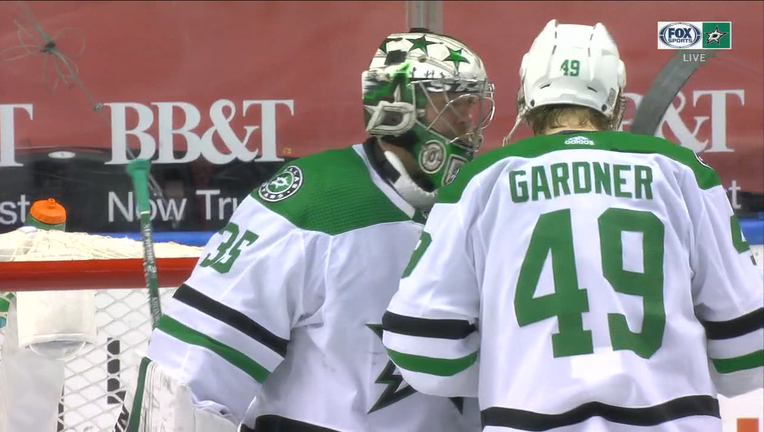 SUNRISE, Fla. (AP) - Anton Khudobin made 43 saves for his second shutout of the season, leading the Dallas Stars to a 3-0 victory over the Florida Panthers on Wednesday night that ended their six-game winless streak.

Defensemen John Klingberg, Esa Lindell and Joel Kiviranta scored for the Stars, who are 1-3-3 in their last seven. They hadn't won since beating Columbus on the road 6-3 on Feb. 2.

Khudobin has shut out Florida three times in nine career starts. He has 10 career shutouts overall.

Chris Driedger made his fifth start in Florida's last six games and stopped 23 shots in the loss.

The goaltending pairing of Khudobin and Driedger was a rematch from Monday, when the Panthers had 52 shots on goal. That included 29 shots in the second period -- a franchise record for one frame -- and Khudobin matched his career best with 49 saves in Florida's 3-1 win.

Dallas opened the scoring when Klingberg wound up and fired in the game's first shot just 53 seconds in while on a delayed penalty. The teams played a testy remainder of the period.

Khudobin was exceptional in the second, stopping MacKenzie Weegar on an odd-man rush at 6:54. He also turned back Carter Verhaeghe's wrister from the low slot at 10:07 to maintain the Stars' slim lead.

Lindell's second goal came 2:17 into the third to make it 2-0. Kiviranta's empty-netter sealed the win.

The league reworked 11 games involving the Stars on Tuesday, including two each at home against Nashville and Tampa Bay that were postponed last week due to severe weather in Texas.

In all, they will play their remaining 42 games in 75 days and finish the campaign with seven straight on the road.

The club will play eight times against Tampa Bay, six more with the Panthers and four versus Carolina - the top teams in the division.

"Hockey is not meant to be played four (games) in six (nights), let alone what we're going to do," Stars coach Rick Bowness said when he learned of the new schedule. "This is going to be incredibly taxing on our players."

BACK WHERE IT ALL BEGAN

The native of Togliatti, Russia, who has 25 career goals, was a first-round selection (12th overall) by the Stars in the draft held in the Panthers' arena on June 26, 2015.

FANS IN THE STANDS

The clubs will conclude their three-game series Thursday night.