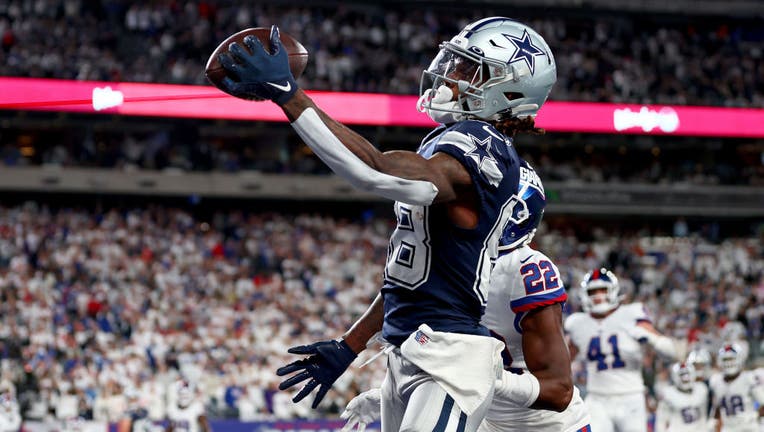 EAST RUTHERFORD, NEW JERSEY - SEPTEMBER 26: CeeDee Lamb #88 of the Dallas Cowboys catches a 1 yard touchdown pass against the New York Giants during the fourth quarter in the game at MetLife Stadium on September 26, 2022 in East Rutherford, New Jerse

EAST RUTHERFORD, New York - CeeDee Lamb made a one-handed touchdown catch with 8:30 to play to cap a go-ahead drive that featured a big fourth-down gamble by Mike McCarthy, and the Dallas Cowboys beat the New York Giants 23-16 Monday night.

Ezekiel Elliott scored on a 1-yard run to ignite a comeback from a seven-point deficit and Brett Maher kicked three field goals as Cowboys (2-1) beat the Giants (2-1) for the 10th time in 11 games.

Cooper Rush threw for 210 yards, including the 1-yarder touchdown to Lamb, in winning his second straight game filling in for the injured Dak Prescott (thumb).

Saquon Barkley scored on a weaving 36-yard touchdown run that gave the Giants a brief 13-6 lead. Graham Gano added three field goal, including a 51-yarder with 3:37 to play to make it a one-score game.

The Giants got the ball back with 1:45 to play, but the series ended quickly with an interception by Trevon Diggs, sending New York coach Brian Daboll to his first defeat.

If there was a big play in the game, it came from McCarthy. Faced with a fourth-and-4 at the Giants 41 with the score tied at 13 and 10:27 to play, the Dallas coach went for the first down. Rush hit Lamb right at the sticks on the next play and then hit tight end Peyton Hendershot for 10. He then found Lamb on consecutive passes of 26 and then the sensational one-hander on a fade route for the go-ahead score.

A 28-yard punt return by KaVontae Turpin set up a 44-yarder by Maher that stretched the lead.

Dallas came into the game having allowed only one touchdown in each of its first two games, and the trend continued on Monday night. The defense hounded Daniel Jones, sacking him five times, with DeMarcus Lawrence tying his career high with three.

Maher sandwiched field goals of 26 and 28 yards around a 42-yarder by Gano to give Dallas a 6-3 halftime lead.

Cowboys: Lawrence was injured early in the third quarter when he hurt a foot on a play that Jones was sacked by safety Donovan Wilson. ... The Giants had Sterling Shepard seemingly hurt a leg on New York’s final offensive play.

The Cowboys will take on the Washington Commanders on Sunday. Prior to Monday night's game Dak Prescott had the stitches from his surgically repaired right thumb removed. He would not rule out playing against Washington.