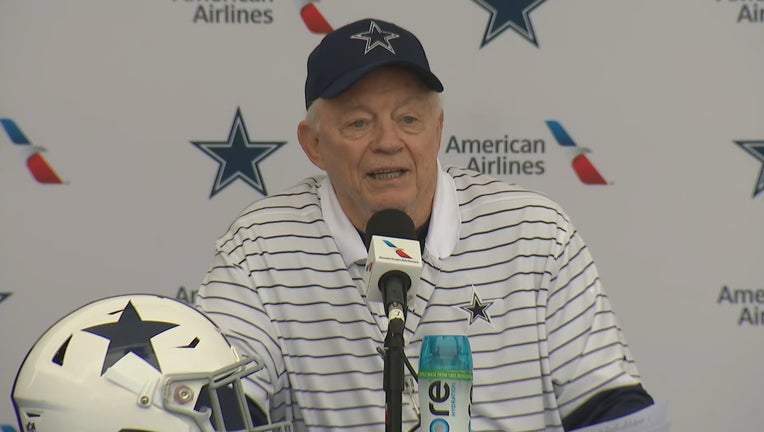 OXNARD, Calif. - The Dallas Cowboys have their first practice at training camp Wednesday in California.

No other franchise has a ritual quote like it, the camp-opening state of the union address from owner and general manager Jerry Jones.

Technically speaking, it’s a news conference featuring Jerry and Stephen Jones, and whomever the head coach might be at the time. But Jerry draws most of the attention.

And with 26 years and counting without a Super Bowl, Jerry Jones talked about what would qualify as a success.

Jones turns 80 in October and said he understands that loyal fans are frustrated. He is too.

Head Coach Mike McCarthy won 12 regular season games last year but lost the first playoff game. As he enters his third year in Dallas, he’s hearing talk about how this could be his last unless things go really well. Sean Peyton is out there, after all.

At Tuesday’s news conference before anybody could ask, Jones tried to quiet the coaching speculation.

"I want to be real clear. He wouldn’t be sitting here today if I didn’t think he was the man to lead this team to a Super Bowl. He would not be and I have choices. And so, that’s not meant to be incensitive to anybody. That’s a fact," he said. "The guy to my right is who I’m convicted about and have been."

"I want to focus on football. Part of the job of coaching in this business is there are things out there. And really your family has to deal with it but other than that, I think even more so ever in this league," McCarthy said.

McCarthy has been through this before. He spent 13 years with the Packers and won a Super Bowl there but was fired seven years later.

Now he tries to get it done in Dallas, along with all the pressure that comes with the job.