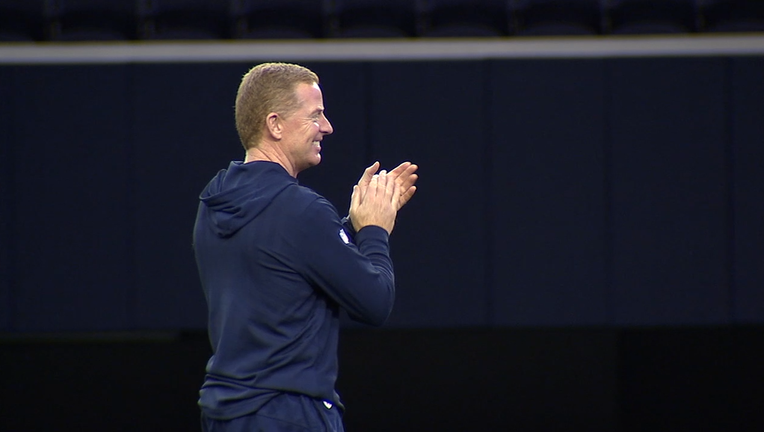 Jason Garrett is headed to the other side of the Giants-Cowboys rivalry.

The team also announced the hiring of Patrick Graham as the defensive coordinator and assistant head coach. Thomas McGaughey was retained by Judge as the Giants’ special teams coordinator.

Garrett was told Jan. 5 he was not being brought back by the Cowboys after coaching the team for the previous 9 1/2 seasons. He took over in Dallas as the interim coach when Wade Phillips was fired halfway through the 2010 season and went 87-70, including the playoffs.

“It’s a great system he brings with great teaching that will allow our players to go out there and play aggressively.”

The 53-year-old Garrett had the club’s second-longest tenure behind Pro Football Hall of Famer Tom Landry.

Dallas finished 8-8 for the fourth time under Garrett this season. The Cowboys opened 3-0 before dropping eight of 12 and losing control of their playoff fate. Dallas missed the playoffs six times in Garrett’s nine full seasons.

His contract was expiring with the Cowboys, who instead turned to Mike McCarthy as coach.

Garrett wasn’t out of a job for long as Judge made his highest-profile hiring since joining the Giants on Jan. 8. Garrett gives Judge, a first-time NFL head coach, a veteran assistant on his staff.

The Cowboys had the league’s top-ranked offense this season, averaging 431.5 yards per game with quarterback Dak Prescott and running back Ezekiel Elliott leading the way.

With the Giants, Garrett will be tasked with helping develop quarterback Daniel Jones, who showed lots of promise in his rookie season after taking over from Eli Manning as the starter. Jones threw for 3,027 yards and a franchise rookie record 24 touchdowns with 12 interceptions in 13 games, including 12 starts.

Garrett also inherits running back Saquon Barkley, who dealt with a high ankle sprain early in the season but came on strong at the end and finished with 1,003 yards rushing — reaching the 1,000-yard mark for the second straight year to begin his career — and six touchdowns. He also had 52 receptions for 438 yards and two TDs.

Garrett had several NFL stops as a player, including four seasons with the Giants as a backup quarterback from 2000-03. He began his NFL coaching career as Miami’s quarterbacks coach under Nick Saban in 2005 and became Dallas’ offensive coordinator in 2007.

“There were guys I worked with that I came across in my career at both Alabama and at the New England Patriots that worked with Jason through their time in Miami with him,” Judge said. “They consistently all reflected on how smart he is, how great a teacher he is and how his perspective of the game was through a different lens than most coaches.

“And when he sees it, he’s able to communicate it and paint that mental image to the players. And he does a fantastic job of making in-game adjustments.”