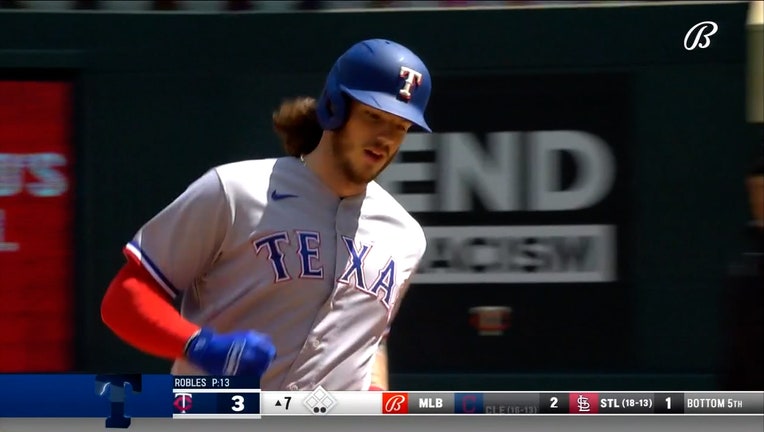 MINNEAPOLIS - The first nine innings for the Minnesota Twins haven't exactly been a blast. Their experience after that has been quite the exhausting experience.

"Based on the first month of this season? I'm starting to sour on it," manager Rocco Baldelli said of the speed-up-the-game rule started last season that puts a runner on second base to begin each extra inning.

Working overtime has worked far better for the Texas Rangers, who used Willie Calhoun's RBI single in the 10th inning Thursday to beat the reeling Twins, who fell to 0-7 in extra innings.

Joey Gallo and Jonah Heim homered for the Rangers, whose third straight matched the team's season-long streak. They raised their record to 3-0 in four-game series and 4-0 in extra innings.

"They're a fun team to watch. I told them that after the game, with a few expletives," Texas manager Chris Woodward said.

Rangers relievers logged 12 2/3 scoreless innings over the last three games and have been credited with each of the team's last five victories.

Brett de Geus and Taylor Hearn (1-1) each pitched two scoreless innings in this one, and Josh Sborz earned his first save with a dominant 10th against a Twins team that has hit its fourth losing streak of three games or more this year.

"The experience they're getting now in these leverage spots, they're never going to forget that," Woodward said.

Heim was the automatic runner at second in the 10th against Tyler Duffey (0-1), who let him advance with a wild pitch. Calhoun smacked a single to right off an eye-high fastball to score him.

Sborz struck out Willians Astudillo, who had an earlier two-run single among his three hits and one of the toughest batters in baseball to strike out. Pinch-hitter Josh Donaldson fanned on three pitches. Then Gallo made a diving, snow-cone catch of a shallow fly to save the tying run and end the game.

"There's a reason why Joe has gold on his glove," Calhoun said.

For the Twins, explaining this failure has become just as elusive as those wins.

"Could there be pressure? After seven of them, could that be something that guys are thinking about? I think everyone's thinking about it at one point or another when you approach those situations, but it still doesn't mean we can't refocus on what we have to do," Baldelli said.

Pineda, who recovered from stiffness and swelling in his wrist after being hit by a batted ball in his last start, finished six sharp innings for the Twins with five strikeouts and a 3-2 lead.

Heim, the backup catcher who came to the plate batting .105, took Hansel Robles deep with two outs in the seventh to tie the game. Byron Buxton just missed catching the ball with his jump at the center field wall.

Rangers starter Jordan Lyles, who was torched for 16 hits and 12 runs in 6 2/3 innings over his previous two turns, finished five innings. He has allowed a homer in 12 straight starts, a streak extended when Max Kepler hit his 10th career leadoff shot.

That was the first home run of the season for the slump-ridden Kepler, who had 36 homers in 2019.

Twins 2B Nick Gordon had a walk and a single and became the first player in team history with two stolen bases in his major league debut.

With the news from Minnesota Gov. Tim Walz that capacity limits on outdoor gatherings will end Friday, the Twins were excited about the prospect of more fans at Target Field. They've played in front of crowds of slightly under 10,000 people so far.

"If we find a way to do it comfortably and safely, I think the atmosphere will improve in a big, big way, and I think that it's going to help us too on the field," Baldelli said.

Rangers: RHP Kohei Arihara, who has been working through a sore middle finger on his pitching hand, remains on track to rejoin the rotation Saturday.

Twins: Buxton put on the brakes with a grimace while running out a grounder in the ninth and was removed from the game with a strained hip. His status was announced as day to day.