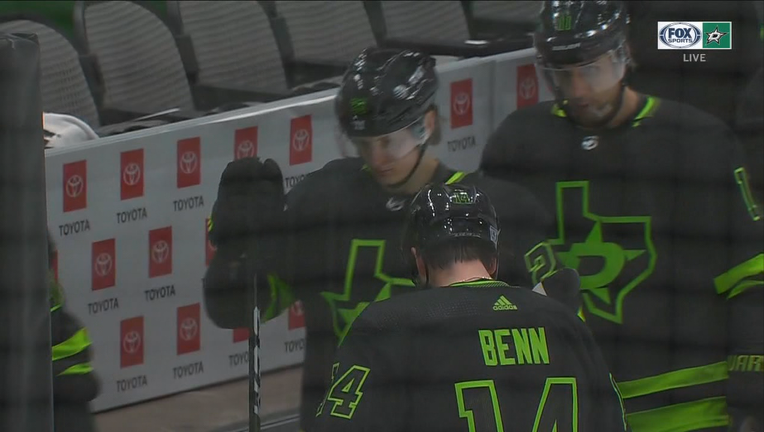 DALLAS (AP) - Vincent Trocheck scored the only goal in the shootout after Joe Pavelski tied it for Dallas late in regulation, and the Carolina Hurricanes beat the Stars 4-3 on Saturday night for their fourth win in four tries this season against the defending Western Conference champions.

Dallas has just one win in eight games since sweeping a four-game homestand to start the season. Two of Carolina’s four victories over the Stars have been in regulation, the other two in shootouts — one each at home and on the road.

Carolina finished another two-game sweep of Dallas after winning the first game and losing the second in consecutive sets at Chicago and Columbus.

"The fact that we figured it out, I don't even know if we figured it out, it's just that we came out with a win," said Jordan Martinook, who gave Carolina its first lead with just his third goal in 54 games over the past two seasons. "It wasn't our best game, but at the end of the game we got the win."

The Hurricanes looked like they had the win in regulation when Sebastian Aho broke free with an empty net in front of him and a 2-on-1 with Dallas trying to get even on a power play with a 6-on-4 advantage in the final minute.

Standout young Dallas defenseman Miro Heiskanen reached behind with his stick in his own zone when Aho tried to pass, and the deflection created a transition chance going the other way.

Pavelski beat Alex Nedeljkovic with his NHL-leading seventh power-play goal on a feed from Jamie Benn with 40 seconds remaining after the Stars had pulled rookie goalie Jake Oettinger and gone another man up on Andrei Svechnikov's roughing penalty.

"He knows all the way where the guy is behind him, and he swings his stick in the way," fellow defenseman John Klingberg said of Heiskanen. "That's something only Miro is doing. He's really good with his stick."

Pavelski was among three Dallas skaters to get stopped by Nedeljkovic in the shootout. His stop on Denis Gurianov sealed the win after Trocheck beat Oettinger.

Carolina trailed 1-0 in the second before Teuvo Teravainen and Martinook scored their first goals of the season. Jordan Staal's power-play goal early in the third period made it 3-1.

The Stars gave themselves a chance late with Jason Robertson’s second career goal about eight minutes after Staal's fourth goal of the season.

Nedeljkovic made 26 saves for his first win in his second start as the backup to James Reimer, who has the other three victories over Dallas.

"He hadn't played in so long, so that first game I thought that got the rust out and he was actually fine in that game," coach Rod Brind'Amour said. "Tonight he looked solid. Good all the way around. He was, I think, the difference in the game tonight."

The Stars forced the shootout with a 4-on-3 penalty kill in the final 40 seconds of overtime after Blake Comeau was called for elbowing. Dougie Hamilton hit the post with about 11 seconds to go.

Oettinger, getting the start over Anton Khudobin, even though Dallas' No. 1 goalie has played just once in 10 days, had 18 stops while dropping to 2-0-3 in his rookie season.

Dallas' Jason Dickinson opened the scoring when he backhanded a rebound past Nedeljkovic after the goalie made a pad save on a redirect from Andrew Cogliano.

Forwards Alex Galchenyuk and Cedric Paquette were among Carolina's scratches after they were acquired from Ottawa in a trade earlier in the day. Galchenyuk, the No. 3 overall pick in the 2012 draft, has 321 points (136 goals, 185 assists) in 557 career games with five teams.

Martinook’s goal came when he deflected Jake Gardiner’s pass between Oettinger’s legs for a 1-1 tie not long before Klingberg was called for tripping with slightly more than two minutes left in the second.

Just as the power play — and the second period — was ending, Martin Necas found Teravainen alone in the left circle. It counted as an even-strength goal with seven seconds to go in the period even though the Stars still had just four players in their defensive zone.

The Hurricanes open a five-game homestand Monday against Columbus.

The Stars are halfway through an eight-game homestand, their longest of the season, with Nashville coming next for a back-to-back starting Monday.