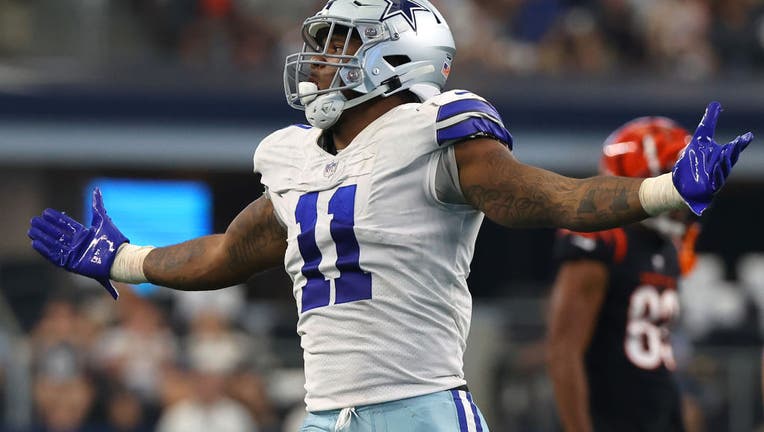 ARLINGTON, TEXAS - SEPTEMBER 18: Micah Parsons #11 of the Dallas Cowboys reacts after sacking Joe Burrow #9 of the Cincinnati Bengals (not pictured) during the third quarter at AT&amp;T Stadium on September 18, 2022 in Arlington, Texas. (Photo by

FRISCO, Texas - Cooper Rush will look to stay undefeated as a starting quarterback as the Dallas Cowboys take on the Super Bowl champs Los Angeles Rams on Sunday.

The Dallas Cowboys are in no rush to get Dak Prescott back at quarterback, thanks to Rush.

A trip to Los Angeles to face the defending Super Bowl champion Rams on Sunday seemed a good plan for Prescott’s return when the prognosis improved from as many as eight weeks to as few as four.

Owner Jerry Jones sounded as if more healing time for the fractured right thumb might be in order after Rush improved to 3-0 as a starter this season and 4-0 for his career in a 25-10 victory over Washington.

Dallas is winning with defense. The four touchdowns allowed through four games match the 1970 and 1972 teams for the fewest in franchise history.

While the Cowboys had to settle for two sacks a week after Washington’s Carson Wentz was dropped nine times, they did force two intentional grounding penalties and a slammed water bottle on the sideline from the frustrated QB. Dallas (15 sacks) entered Monday second in the NFL behind Philadelphia (16).

"I’ll repeat it again," reigning NFL Defensive Rookie of the Year Micah Parsons said. "I think we’ve really got a chance to be the best defensive team in this league."

The Cowboys will look to keep their winning streak alive when they take on the Rams.

How to watch: In Dallas, you can watch the entire game on FOX 4. If you're outside the DFW area, you can catch it on all FOX stations throughout Texas. You can stream it on the NFL app and NFL Network. NFL rules prohibit FOX 4 from streaming the game so, as much as we'd LOVE to stream the games here, we can't. Sorry.