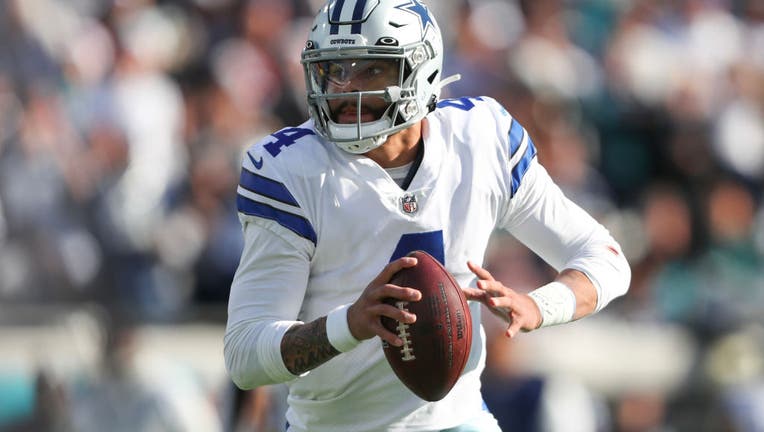 JACKSONVILLE, FLORIDA - DECEMBER 18: Dak Prescott #4 of the Dallas Cowboys looks to pass during the second half against the Jacksonville Jaguars at TIAA Bank Field on December 18, 2022 in Jacksonville, Florida. (Photo by Courtney Culbreath/Getty Imag

ARLINGTON, Texas (AP) - The Dallas Cowboys lost a game they should have won at Jacksonville and backed into the playoffs when the New York Giants beat Washington.

Virtually locked into the fifth seed in the NFC with three games remaining, Dak Prescott and company face an intriguing finish of trying to build momentum for the postseason in games that are unlikely to have much consequence otherwise for them.

There’s little question of the need for the Cowboys (10-4) to beat NFL-leading — and NFC East rival — Philadelphia (13-1) on Saturday. Their psyche could use the boost.

After Dallas blew double-digit leads in the second half of losses at Green Bay last month and in Sunday’s 40-34 overtime loss to the Jaguars, the doubters will howl outside team headquarters.

"I’ve been the one seed and (been) knocked on my (rear) and won it from the fifth seed," coach Mike McCarthy said. "So, like I said, we’re not supposed talk about that until we get to 11 wins and we’re not there yet.

"We just got to keep our head down and keep working, and we’ll react properly to this. It’s a very accountable locker room."

The Cowboys’ loss to Jacksonville after leading 27-10 in the second half took the pizazz out of the Christmas Eve clash with the Eagles. Even with a win, Dallas has almost no chance to overtake Philadelphia.

It’s also unlikely that either the Giants or Commanders will pass the Cowboys in the division standings, so the final two games of the regular season at Tennessee and Washington figure to raise questions of resting starters and other players batting injuries.

There are plenty of the latter after linebacker Leighton Vander Esch left the Jacksonville game with a neck injury, and defensive end Dorance Armstrong was sidelined by a knee injury.

The Cowboys are already without two starting cornerbacks the rest of the season in Anthony Brown and Jourdan Lewis, and one of the replacements, Kelvin Joseph, gave up the long touchdown that sparked the Jacksonville rally.

Prescott’s two interceptions followed, including the one Rayshawn Jenkins returned 52 yards for the winning touchdown in OT. Prescott’s 10 interceptions since Week 8 are the most in the NFL.

"If we would have won right there on the field goal, I don’t think that necessarily changes the lull in the third quarter, the bad things that happened in this game," Prescott said. "We’ve got to move on. It’s not like that puts us in a better position or not."

The Cowboys will look to beat the division rival Eagles and get back to winning ways.