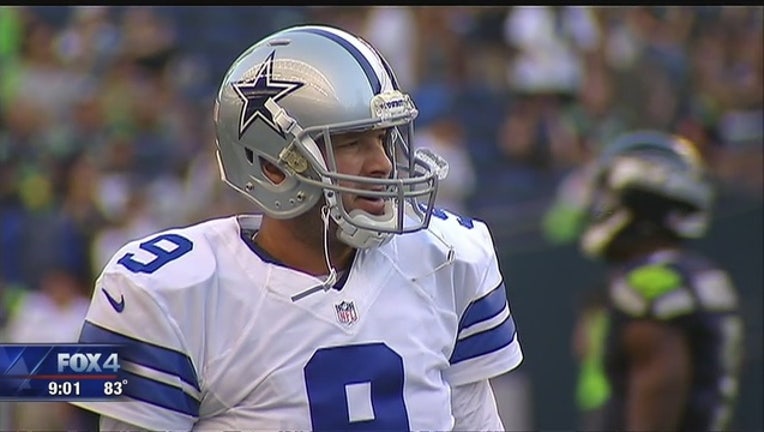 FRISCO, Texas (AP) — Jason Witten stood in the posh locker room at the new practice facility for the Dallas Cowboys, addressing a topic that came up frequently at musty old Valley Ranch — as recently as last year.

Quarterback Tony Romo is hurt again, and his favorite tight end is here to tell you the Cowboys can make it work without him. Even though they went 1-11 last season with Romo sidelined twice by a broken left collarbone.

Now Romo has a broken bone in his back — his fourth back injury in less than four years — and no timetable for a return. Witten would also like to remind people that the player he came into the league with 13 years ago once returned to a game with broken ribs and a punctured lung.

"People are going to bet against him, that's fine, and I don't think that's unfair to do so," Witten said. "But if you know what he's about, which everybody in this building does, he's going to be back sooner than probably expected and he'll play better than anybody thought he would because I know that's what he's about."

Before even taking a question at his opening news conference for training camp, owner and general manager Jerry Jones said the Cowboys were finished waiting for star players to return after injuries to Romo and receiver Dez Bryant and suspensions for linebacker Rolando McClain and defensive end Greg Hardy set the tone for a first-to-worst slide to 4-12.

In keeping with that vow, Jones is talking up rookie fourth-round pick Dak Prescott, who figures to start at least the first few games as long as he's healthy, starting with the opener Sept. 11 against the New York Giants.

And Prescott has been impressive enough in the preseason for Jones to lose interest in adding a veteran after backup Kellen Moore broke his right ankle in a camp practice. Romo's injury forces the Cowboys to look outside for a quarterback, but now it will be a backup to Prescott instead of to the team's 36-year-old leader.

"We've got a lot of energy here," Jones said Tuesday on his radio show. "And we can win with this. I think Dak under center brings a lot of that there. That doesn't mean you didn't have a lot of excitement with Tony being healthy. We've got a chance to develop that energy, that asset so to speak with Dak."

The failures last year were the result of spotty play from backups Brandon Weeden and Matt Cassel and a defense that finished last in the NFL in takeaways and turnover margin. The Cowboys also struggled to develop a deep threat without Bryant, an All-Pro in 2014 when the Cowboys won the NFC East and a playoff game.

"I think when I talked to you guys in April, the first thing we had to do coming off that season was we had to evaluate that thoroughly," Witten said. "I think as a football team we did a really good job of that, and that's hard. It's hard to look at yourself and say I didn't play well. We didn't play well."

The injuries to Romo and Bryant (broken foot) overshadowed a defense that was missing Orlando Scandrick, who was lost for the season to a knee injury in training camp. The Cowboys missed his playmaking, and maybe his straight talk as well.

"What do you want us to do, quit?" Scandrick shot back at reporters this week. "We are here to win games. Tony is not going to play football one day. Nothing is forever. People get hurt. You build a team to withstand this kind of stuff."

Romo is 78-49 as the starter, and the Cowboys are 7-20 when he has been sidelined by injuries that include a broken finger, three breaks of his left collarbone, a herniated disk and another small fracture in his back.

The broken ribs and punctured lung don't count because he didn't miss a game, returning in a come-from-behind win at San Francisco and playing eight days later in a home win on a Monday night against Washington in 2011.

"I think on the face of this, it really does hurt," Witten said. "But I don't think the expectations adjust any. I think the reason for that is we believe in the construction of this team, that it is strong, and the people around us. We've decided that with Tony."

But they will have to play without Romo — again.