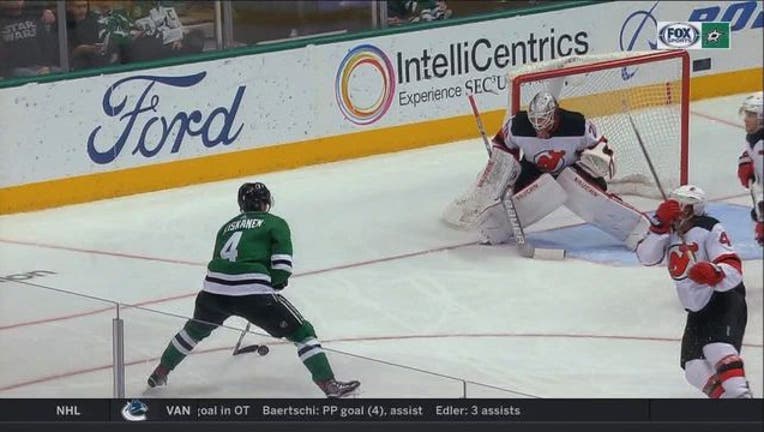 DALLAS (AP) - Miro Heiskanen celebrated his first All-Star nod with two goals, including a third-period tiebreaker to lift the Dallas Stars over the New Jersey Devils 5-4 on Wednesday night.

Heiskanen and Tyler Seguin each scored twice after Jamie Benn tied it at 1 in the first period. Heiskanen, a 19-year-old rookie defenseman, has nine goals this season.

Seguin and Benn have been under scrutiny since Stars CEO Jim Lites ripped Dallas' highest-paid players Friday for "terrible play." Seguin ended a five-game goal drought that dated almost two weeks. Benn scored in his second straight game but didn't play for most of the final two periods because of an upper-body injury.

Kyle Palmieri, Jesper Bratt, Drew Stafford and Brian Boyle scored for New Jersey, which twice trailed by two goals before sending the game into the third period tied at 4.

Ben Bishop finished with 30 saves, 20 in the third period after making only one stop in the first, which ended 1-1 even though Dallas outshot New Jersey 16-2. New Jersey had no shots on goal for a total of 23:42 spanning the first and second periods.

The Stars' Alexander Radulov had three assists, and John Klingberg had two.

Heiskanen, who had five shots on goal in the first period, was rewarded when he scored at 3:21 of the second while the teams were skating 4-on-4. Two players from each team were in the penalty box after an altercation at 2:05. New Jersey's Miles Wood received a major penalty for interference that knocked Benn from the game.

Wood was still in the box when Seguin scored a power-play goal from the left circle at 6:38.

The Devils pulled within a goal during an eight-second flurry when Nico Hischier stole the puck for a breakaway, had two shots stopped by Bishop, retrieved both rebounds and passed to Bratt at the top of the slot at 11:08.

New Jersey rallied to tie with goals by Stafford at 17:21 and Boyle at 18:48, but Heiskanen won it by skating the puck from the blue line to the crease and beating Blackwood on the backhand.

Devils: Play the second game of a four-game trip at Arizona on Friday.

Stars: Finish a four-game homestand on Friday against Washington.