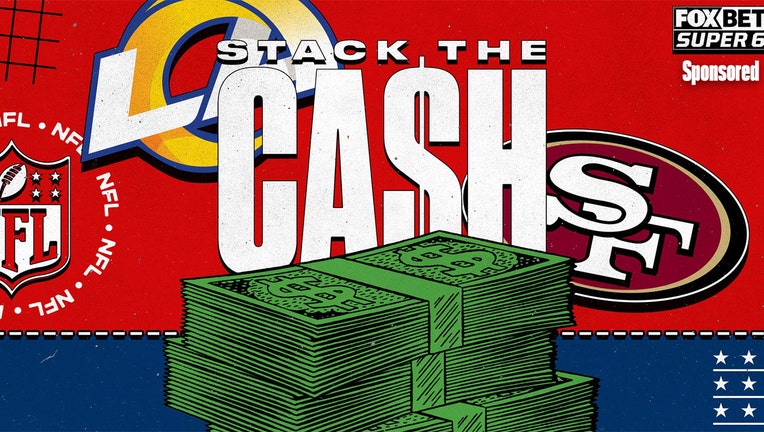 It's the penultimate NFL weekend of the year, which means Sunday's NFC Championship Game between the San Francisco 49ers and Los Angeles Rams is also your second-to-last chance to play FOX Bet Super 6 on the NFL this season!

And fans, we're in luck, as FOX Bet Super 6 is bringing back "Stack the Cash" once again for the NFC Championship (and next month's Super Bowl, but we'll get to that in a couple weeks).

In case you haven't played "Stack the Cash" this NFL season, the concept is simple: the more people who enter the Super 6 contest for this weekend's NFL clash, the higher the jackpot climbs! And this week's grand prize, which started at a cool $100,000 of Terry Bradshaw's money, has already climbed to $200,000 and counting!

So, how can you get in on the action? First, if you haven't already, download the FOX Bet Super 6 app. Then, enter Sunday's NFC Championship Stack The Cash Challenge. Make your predictions on six questions about how Saturday's game will play out, then tune in to see if you're right!

But with "Stack the Cash," there's one more step — don't forget to tell your friends, family, neighbors, grocery store cashiers and everyone else to enter and make their picks. Because remember: the more people who enter the contest, the bigger the jackpot will be for whoever takes home the prize.

To help you get to the pay window, here are my thoughts on this week's FOX Bet Super 6 contest.

How many total touchdowns will there be in the game?

In a third meeting between two divisional foes, with two coaches who have been together on staff before, it’s likely we see a low-scoring game. The first meeting had a total over/under of 50 combined points, and it landed on 41. The second meeting had a total of 46.5, and the score was tied at 17 with four minutes left. It was headed toward an easy under. Then, two TDs forced overtime.

This total opened at 47 and has taken under money. I expect extremely conservative game plans from both sides, and I’ve already bet the under. Two error-prone QBs — though Stafford has been flawless through two playoff games — could lead to short fields, so there’s tons of risk here. But I’m projecting a low-scoring, run-heavy game with neither coach wanting to risk losing the game.

Which player will have the longer play, and how long will the play be?

Brandon Aiyuk, Odell Beckham Jr. or Tie, with ranges from 0 to 55-plus yards

The world will be on Odell Beckham here, so perhaps zag with Aiyuk, who had a monster Week 18 game against the Rams (six catches, 107 yards). He had a 31-yard reception, longer than anything Beckham has produced versus the 49ers this year.

Beckham had a 31-yard catch against the poor Cardinals secondary in the Wild Card round; he torched the Packers for a 54-yarder in November. But mostly, he’s been in the Robert Woods role, as opposed to a deep threat.

Which player will have more receptions, and how many receptions will they have combined?

Deebo Samuel has transitioned to more of a running role, carrying 20 times in the playoffs versus just six receptions (on seven targets). He even returned two kickoffs against the Packers.

If we’re projecting a low-scoring, run-heavy game, any number of combined receptions by Kittle and Samuel should be in the vicinity of 10.

Which team will make the longer field goal, and how long will it be?

Robbie Gould has been one of the greatest kickers in NFL playoff history, going 20-for-20, including the game-winner Saturday in Lambeau. Matt Gay has been automatic inside 40 this season (24-for-24) but had a stunning miss from 47-yards against Tampa. It was short, something you rarely see from kickers at this level in the NFL right now.

This is probably an overreaction based on that kick — his only other miss under 50 came on October 3rd vs Arizona. But still.

Which team will have more solo tackles, and how many will they have?

The Rams have had more tackles in both meetings this season, ringing up 39 solo tackles in the first meeting, and 49 in the overtime game, as the ground-heavy SF offense ran more plays in each game. And despite another good showing defensively against the Bucs (51 rushing yards allowed, 3.6 yards per carry), it was largely a reflection of the Rams leading 27-3 and Tampa going to the air.

The 49ers likely will take the opening kickoff and roll down the field to get a lead and be able to control tempo and not make Garoppolo go to the air. Let’s fire right in the middle and take the Rams to lead in tackles.

Which team will win and by how many points?

By this point, everyone knows the obvious — Kyle Shanahan has owned Sean McVay in recent years, going 6-0 in their head-to-head meetings. This includes a sweep this season, with the Week 18 comeback from a 17-0 deficit propelling the 49ers into the playoffs. However, none of that is predictive.

Why have the 49ers had so much success against the Rams? Partially, they are able to generate pressure on Matt Stafford with four pass rushers, and thus dropping seven defenders and mixing coverage. The 49ers did it to Aaron Rodgers, and they’ll do the same to Stafford. The Bucs foolishly blitzed Stafford 17 times, and he had a field day, as the Rams receivers can win all over and Matty Ice can make it rain.

Can LA continue to dominate in the trenches, though? The Rams would love to get LT Andrew Whitworth back. This much we know — the 49ers have to be exhausted. This will be their fourth straight road game, and even if you want to say two of them will be short trips from the Bay Area down to LA, it’s still seven road games in their last nine, which is a brutal stretch.

The Rams and McVay slay the white whale and get back to the Super Bowl.

Play FOX Bet Super 6 every week for your chance to win thousands of dollars, including the "Stack the Cash" NFC Championship Challenge and many more contests. Just download the FOX Bet Super 6 app and make your picks today!