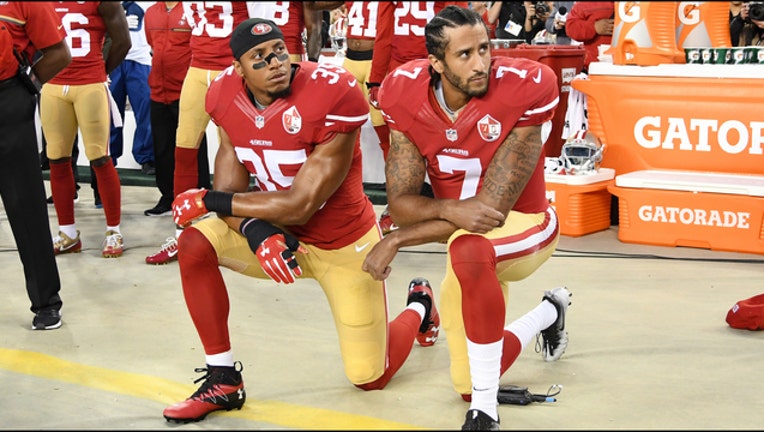 Colin Kaepernick #7 and Eric Reid #35 of the San Francisco 49ers kneel in protest during the national anthem prior to playing the Rams at Levi's Stadium on September 12, 2016 in Santa Clara, California. (Photo by Thearon W. Henderson/Getty Images)

CHARLOTTE, N.C. (AP) - Eric Reid is getting another shot in the NFL.

The Carolina Panthers on Thursday have signed the free agent safety to a one-year contract. Terms of the deal were not announced.

Reid filed an official grievance letter with the NFL in October of 2017, alleging that team owners and the league colluded to prevent his employment due to his protest activities. Reid, along with quarterback Colin Kaeprnick, participated in protests during the playing of the national anthem before NFL games to highlight social awareness and racial injustice.

Panthers general manager Mary Hurney said he wasn't concerned about Reid's past protests, telling The Associated Press it was a "football decision" - and one that was approved by new owner David Tepper.

"Every decision we make we communicate with" Tepper, Hurney said.

Tepper bought the team from Jerry Richardson this past summer.

"Everybody we sign we ask if he has the skill set and if he helps us win football games - and we feel the answer is yes," Hurney said of Reid.

It's unclear if Reid plans to continue his protests when he begins playing for the Panthers.

The Panthers have a bye this week and next play at home on Oct. 7 against the New York Giants.

Reid is expected to start right away after the Panthers placed Da'Norris Searcy on injured reserve last week.

The 6-foot-1, 215-pound Reid played the first five seasons of his NFL career with San Francisco after the 49ers selected him in the first round of the 2013 NFL draft.

"He's a physical safety with good ball skills and he makes plays and he has experience," Hurney said. "He's a young player with skins on the wall. He has played at a very high level. He comes in and helps make our safety positon better."

Reid earned Pro Bowl and All-Rookie honors in his first season after starting all 16 games for the 49ers and recording 92 tackles, four interceptions, 11 passes defensed and one fumble recovery. He started all three playoff games for the 49ers in 2013, helping the team to an NFC Championship game appearance.