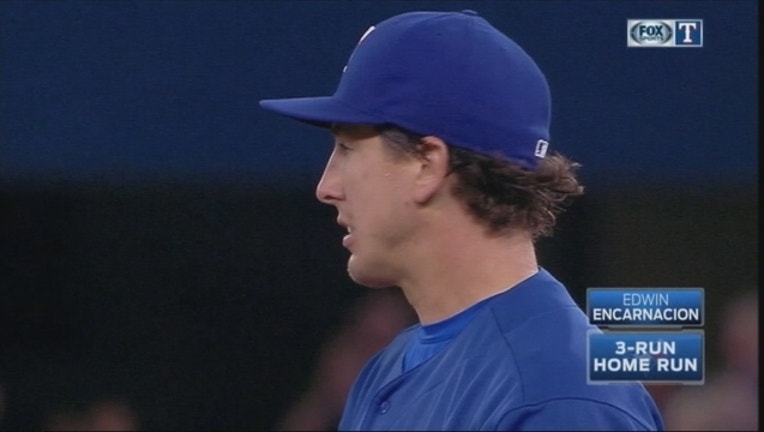 Toronto set season highs for runs and hits (15). The Blue Jays were the top-scoring team in the majors last year, reaching double figures in runs 27 times.

The Blue Jays have won three in a row. They wrapped up their seventh consecutive series win against the Rangers, the team they beat in the AL Division Series last year.

J.A. Happ (4-0) gave up one run and six hits in seven innings. The 33-year-old has permitted no more than three runs in 16 consecutive starts since Aug. 14 last year, when he was with Seattle.

Derek Holland (3-2) was tagged for five runs in the first and chased during a six-run third. He began the game with a scoreless streak of 16 1/3 innings at Rogers Centre, but was charged with 11 runs and 11 hits in 2 2/3 innings.

Encarnacion's three-run shot with two outs in the third was his 202nd home run for the Blue Jays, tying former AL MVP George Bell for fifth on the club's career list.

The six RBIs were the most in a game by a Toronto player since Encarnacion had nine against Detroit last Aug. 29.

Rangers: SS Elvis Andrus was given the day off to rest his sore lower back. He had played 18 consecutive games before Thursday. ... There is no timetable for OF Josh Hamilton to return to rehab assignment after he was removed from a game last Saturday with discomfort on his twice-operated-on left knee. He was eligible to return to the assignment Friday, but instead is working out the Texas Metroplex Institute for Sports Medicine in Arlington.

Blue Jays: 2B Devon Travis played in the field for the first time since off-season shoulder surgery during extended spring training as the Blue Jays played the Yankees. In four innings, he handled two plays without any problems. "Shoulder feels great," Travis said. "I don't even think about it. Getting ready for baseball." At the plate, he went 0 for 3.

Rangers: LHP Cole Hamels (3-0, 3.30) gets the start against Tigers RHP Jordan Zimmermann (5-0, 0.54) as the Rangers wrap up their seven-game road swing with a three-game set in Detroit. Hamels is coming off his shortest start as a Ranger in Sunday's 9-3 loss to the Angels, where he lasted five innings, giving up a season-high four runs and four walks.

Blue Jays: RHP Marcus Stroman (4-0, 3.77) will face Dodgers RHP Kenta Maeda (3-1, 1.41) in the opener of a three-game interleague series in Toronto. Stroman faces the Dodgers for the first time in his career.