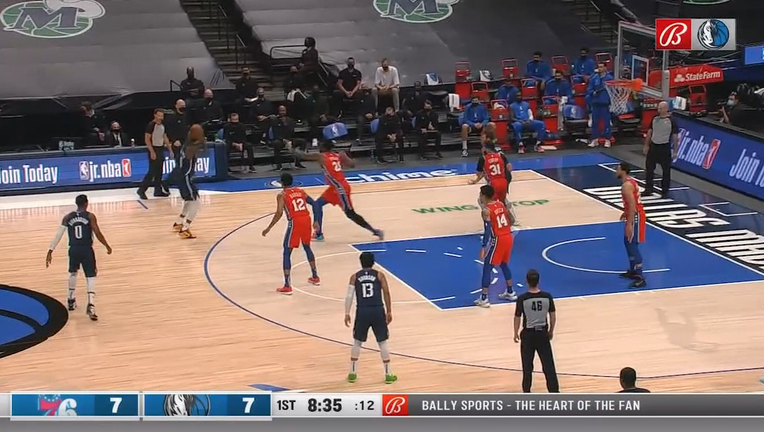 DALLAS - Joel Embiid scored 36 points and the Philadelphia 76ers wrapped up a long stretch of mostly road games with a 113-95 victory over the Dallas Mavericks on Monday night.

Embiid made all six of his free throws in the first four-plus minutes and was 14 of 15 from the line as the 76ers finished 8-4 while playing 10 of 12 games on the road going into their final regular-season meeting with Brooklyn.

Philadelphia took a half-game lead atop the Eastern Conference over the Nets, whose game at Minnesota was called off because of the shooting death of a Black man by police in the Minneapolis area.

"Honestly until walking into this interview I didn’t know we played Brooklyn next," coach Doc Rivers said. "I’ll close the book on Dallas when we get on the plane and then start watching whoever the next opponent is. It’ll be a fun game for both teams."

Luka Doncic scored 32 points but the young Dallas star didn't have enough help with European sidekick Kristaps Porzingis sitting out the second night of a back-to-back four days after playing in one for the first time in two months.

"I wish we had our full complement of guys and had a day of rest coming into the game," coach Rick Carlisle said. "But this season you’re rarely going to get what you want when it comes to that kind of stuff."

The Dallas debut of JJ Redick wasn't much of a boost either. The veteran shooting guard had been recovering from a right heel injury since being acquired from New Orleans at the trade deadline more than two weeks ago in hopes of boosting the Mavericks at the 3-point line.

Playing against one of his former teams and his coach from four seasons with the Los Angeles Clippers in Rivers, Redick entered late in the first quarter and missed two shots from inside the arc before connecting on his first attempt from 3. The 36-year-old in his 15th season scored four points, going 1 of 7 from the field and 1 of 3 from deep.

Philadelphia's Furkan Korkmaz was 4 of 7 from 3-point range and matched his season high with 20 points. Tobias Harris scored 10 and Ben Simmons had eight points, six rebounds and seven assists.

Embiid scored eight points, including a three-point play right after a dunk by Simmons, during a 10-1 run that gave Philadelphia a 60-45 lead late in the first half. Embiid, who didn't play in the fourth quarter, was 10 of 17 from the field.

The Mavericks used most of their big men trying to defend Embiid but had no answer. Maxi Kleber picked up two fouls in the first two minutes and combined with Boban Marjanovich and Willie Cauley-Stein for eight fouls in the first half, when Embiid scored 23 points.

"I thought he played in attack mode all night, didn’t settle," Rivers said. "He felt like the last couple of games, he’d been settling. He was phenomenal in how aggressive he was. He made the right plays."

With the Sixers leading by 10 early in the third quarter, Embiid capped nine straight Philadelphia points with a 3 above the key before Seth Curry hit another from deep for a 72-55 lead.

It was Curry's first game in Dallas since his second Dallas stint ended in an offseason trade. He finished with eight points.

76ers: Dwight Howard drew his NBA-leading 14th technical foul late in the third quarter. Two more in the regular season would result in a one-game suspension. Doncic started the day alone in second with 12. ... Danny Green, long a target of the Mavericks to help their 3-point shooting, made a pair 34 seconds apart for the first 20-point lead late in the third quarter. Those were all six of his points.

Mavericks: Cauley-Stein played for the first time in his second game since being cleared after missing 12 games because of COVID-19 protocols. ... Dallas has lost consecutive games for just the second time since a season-worst six-game losing streak. ... Jalen Brunson scored 15 points, and Dorian Finney-Smith had 12 points and 11 rebounds.

76ers: The start of a four-game homestand Wednesday is the deciding game of the three-game series with the Nets. It could play a role in the battle for the top seed in the East. The clubs split the first two meetings, each winning at home.

Mavericks: A visit to Memphis on Wednesday is the only road game in a stretch of nine games for Dallas. A five-game homestand follows. The Mavericks won the first meeting in February, leading from start to finish.