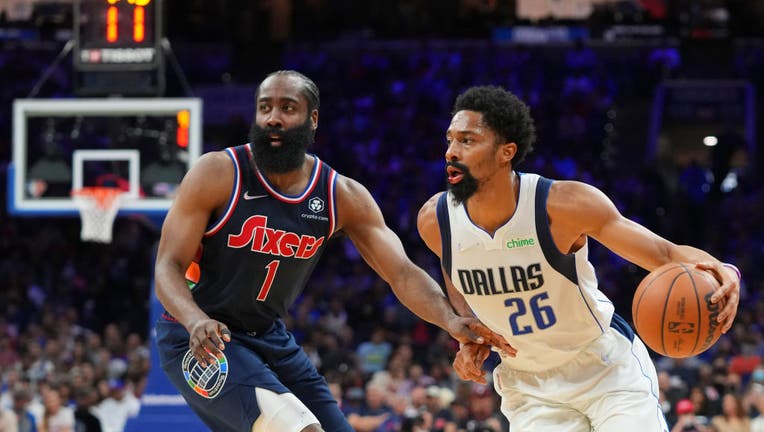 PHILADELPHIA, PA - MARCH 18: Spencer Dinwiddie #26 of the Dallas Mavericks dribbles the ball against James Harden #1 of the Philadelphia 76ers at the Wells Fargo Center on March 18, 2022 in Philadelphia, Pennsylvania. The 76ers defeated the Mavericks

Embiid was 11 of 20 from the floor. Harden also had seven rebounds. Tobias Harris added 14 points, Georges Niang had 12 and Matisse Thybulle 10.

"We had a two-unit team tonight and played well together," 76ers coach Doc Rivers said.

Jalen Brunson, the former Villanova star who played a good portion of his college home games at the Wells Fargo Center, hit his first seven shots and led Dallas with 24 points. He finished 10 of 14.

Luka Doncic had 17 points and 10 assists, but was held to 5-for-20 shooting from the floor and 2-for-10 from beyond the 3-point line. Dwight Powell added 14 points, and Spencer Dinwiddie had 12 for the Mavs, who struggled with Philadelphia's zone defense.

Embiid scored 21 points in the first half, capping a run with fadeaway three-point at the conclusion of the shot clock to give Philadelphia a 58-53 lead at half. He was scored 30 or more points in 33 of 57 games this season.

"The activity that we all had tonight was huge," Embiid said. "We were covering and do what we do best. It was good to see."

With Embiid on the bench to start the fourth quarter, Harden and the backup gave Philadelphia separation. Harden either scored or assisted on 15 straight 76ers points en route to a 99-80 lead.

"I still need to be aggressive," Harden said. "I still have to be in attack mode and score the basketball. Tonight, in that fourth quarter, when I kept attacking — the plays are going to come. We got lobs and we got threes and that's going to come from my aggressiveness. You have to read the game and tonight, I felt like I read the game well."

Embiid has been active for 19th straight games, the third-longest, regular-season active stretch of his career, trailing only a 21 game streak earlier in the season and a 26 game opening to the 2018-19 campaign. He has played in 48 of Philadelphia's past 50 games since returning from a nine-game absence because of the league's health and safety protocols back in November.

"I'm a competitive guy," Embiid said. "I won't lie. I see everything and that's been the knock on me, even though that was (primarily) in my first three years. I like the challenge and I like proving people wrong. But the goal is to ultimately win a championship and be ready for the playoffs and to be at my best. That overrules everything and whatever is best for me to be 100% going into the playoffs, that's what I'm going to do."

Mavericks: At Charlotte on Saturday night to wrap up a six-game trip.