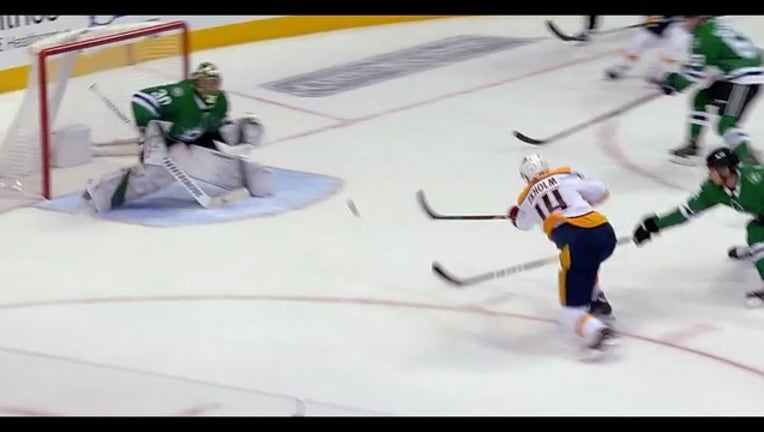 DALLAS (AP) - Mattias Ekholm started overtime in the penalty box. He finished it off with the winning goal.

Ekholm scored 2:27 into overtime, and the Nashville Predators rallied to beat the Dallas Stars 5-4 on Saturday.

Ekholm was penalized for cross checking with 14 seconds left in regulation, 29 seconds after teammate Roman Josi scored the game-tying goal.

Nashville killed off that power play for the first part of OT, and then Ekholm took a cross-ice pass from Kyle Turris and sent the puck over Stars goalie Ben Bishop for his third of the season.

"I think (Dallas' Jason Spezza) played an act on the penalty. There's not much I can do about it. Good job by the guys on killing it."

Josi and Ryan Johansen each had a goal and an assist for the Predators. Ryan Hartman and Yannick Weber also scored, and Juuse Saros had 20 saves.

Gurianov got his first NHL point in the third period of his third game. He deflected a rising slap shot from the blue line by Ben Gleason, who was playing in his first NHL game after only 11 pro games for Texas of the American Hockey League.

"I woke up this morning with a phone call at 7:30," Gleason said. "In about 15 minutes I jumped in the shower and packed a bag. I drove right here (from Cedar Park, Texas).

"I don't think I felt my leg until the second period."

Pitlick scored his third of the season 13:05 into the first, and the Stars opened a 3-1 lead on goals by Seguin and Spezza in the second period.

Hartman got the Predators on the board 12 seconds into the second, and Johansen and Weber tied the game again with goals in the first 1:54 of the third.

"No game is ever out of reach if you can do the right things," Nashville coach Peter Laviolette said. "I thought the first shift of the third period was really big by the Johansen line. They went down, got a goal and shortly another one after that."

Dallas grabbed the lead for the last time when Gurianov scored with 11:02 left.

The Predators had a 14-4 advantage in shots on goal and the only two power plays in the first period, but the Stars scored the only goal.

Dallas scored on its first power play when Spezza sent in a slap shot from the left circle at 14:32 of the second.

Predators: Play the third game in a five-game trip Monday at Anaheim.

Stars: Continue a four-game homestand against Columbus on Monday.