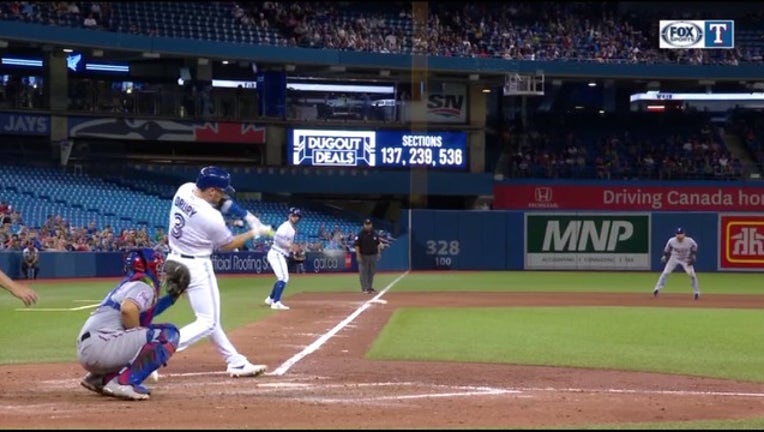 TORONTO (AP) - Held off the scoreboard Sunday in a 1-0 loss to the Yankees, the Toronto Blue Jays bounced back with their biggest offensive outburst of the season.

"As a team, I felt like we were always going to be able to hit," Smoak said. "Over the past month or so, we've definitely been able to do that. I feel like we have the right guys here who are capable of doing some crazy things."

Bo Bichette had the first four-hit game of his young career and Randal Grichuk had three hits, including a solo homer, as the Blue Jays pounded out a team record 13 extra-base hits and won for the 10th time in 15 games.

Drury had five RBI, while Smoak and Grichuk each had four.

Blanked for the ninth time this season a day earlier against New York's Masahiro Tanaka and Aroldis Chapman, the Blue Jays responded with season-highs in runs and hits (21) against six Rangers pitchers.

After Rafael Montero struck out the side in the seventh, catcher Jeff Mathis took the mound for Texas in the eighth and gave up a two-run home run to Danny Jansen.

"Once Montero pitched, I didn't really want anybody else to pitch," Rangers manager Chris Woodward said. "It saved us from having to use another arm. It's huge."

Toronto scored eight runs in the fourth, its biggest inning since an eight-run frame against Seattle on Sept. 20, 2016.

Nomar Mazara, Willie Calhoun and Rougned Odor hit solo home runs but Texas lost by 11 or more runs for the third time this season. The 19 runs allowed by the Rangers matched a season-worst.

Texas has lost five of six, scoring more than three runs just once through the first seven games of a nine-game swing through Cleveland, Milwaukee and Toronto.

"On this road trip, we haven't hit anything," shortstop Elvis Andrus said.

Texas arrived in Toronto on the heels of Sunday's 1-0 shutout victory over the Brewers. On Monday, right-hander Ariel Jurado pitched around a Vladimir Guerrero Jr. double to keep it scoreless in the first, but Drury and Bichette each hit RBI singles in the second as the Blue Jays immediately overturned Mazara's solo homer in the top of the inning.

"When you're facing a young team, sometimes you don't know how to attack them just yet and they used that to their favor," Woodward said of Toronto's hot rookie hitters.

Jurado (6-8) allowed career-highs of eight runs and 11 hits in 3 2/3 innings. He has won just once in his past eight outings.

Smoak hit a two-run homer in the third, his 19th, and Grichuk followed with a shot to left, his 21st. It was the 10th time this season the Blue Jays have hit back-to-back home runs.

Neil Ramirez opened for Toronto and threw seven pitches, all strikes, in a perfect Blue Jays debut. Brock Stewart (2-0) took over in the second and pitched 5 1-3 innings, allowing three runs and five hits.

Rangers: Delino DeShields replaced Elvis Andrus in the seventh and stayed in the game after being hit on the right knee by a pitch from Buddy Boshers in the eighth.

Blue Jays: SS Freddy Galvis was claimed on waivers by Cincinnati. OF Billy McKinney was recalled from Triple-A Buffalo to take Galvis' spot on the roster. .. RHP David Paulino was released from Triple-A.

Bichette has 15 extra-base hits through his first 15 games, more than anyone else in MLB history. Bichette's 26 total hits since his July 29 debut are the most by any big leaguer in that span.

The Rangers also lost 19-4 to Arizona on July 17. The Diamondbacks scored seven runs in the first inning that night.

Rangers: RHP Lance Lynn (14-7, 3.60) has stuck out 70 batters over his past eight starts, the fourth-highest total in the majors behind Houston's Gerrit Cole and Justin Verlander (75) and Cleveland's Shane Bieber (71).

Blue Jays: LHP Thomas Pannone (2-5, 6.83) matched a season-worst by allowing seven runs against the Yankees in his previous start, Aug. 8.