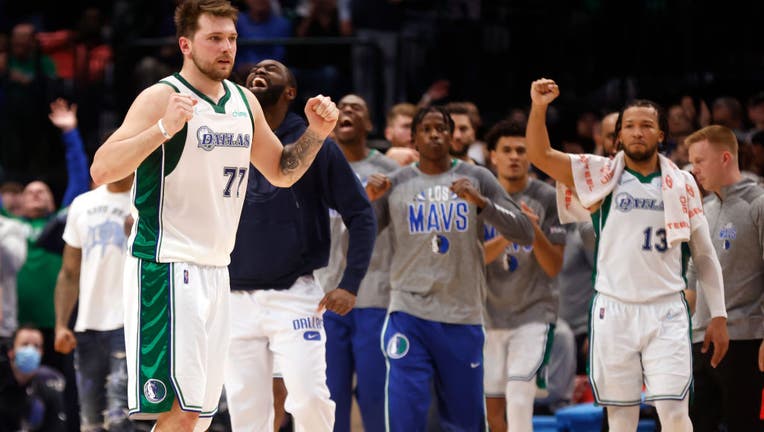 DALLAS, TX - MARCH 3: Luka Doncic #77 of the Dallas Mavericks reacts as the Mavericks play the Golden State Warriors in the second half at American Airlines Center on March 3, 2022 in Dallas, Texas. The Mavericks 122-113. (Photo by Ron Jenkins/Getty

DALLAS - Luka Doncic and the Dallas Mavericks were the ones trying to hold on in the second half against Golden State.

They pulled off what Stephen Curry and the Warriors couldn't four nights earlier.

Doncic scored 41 points and the Mavericks beat Golden State for the second time in five days, winning 122-113 on Thursday night after a huge fourth-quarter rally for the victory in California.

Curry and the Warriors never led but got even for the first time since early in the game during a stretch when Moses Moody scored all 13 of his points consecutively for Golden State in the fourth quarter.

Spencer Dinwiddie put the Mavericks back in front for good by scoring the next four points for a 108-104 lead midway through the fourth in his home debut after the trade that brought him and Davis Bertans from Washington for Kristaps Porzingis.

"I'm not surprised," Doncic said about the surge from Dinwiddie, who finished with 17 points after getting his Dallas high with 24 in the previous Golden State meeting. "I thought it was going to take a little bit longer. He's a great player, and he's a great fit for us."

The Mavericks handed the Warriors a season-worst third consecutive loss and drop them 7 1/2 games behind NBA-leading Phoenix. Golden State, which trailed by 17 points early in the second half, has lost seven of nine games.

"I loved the effort," coach Steve Kerr said. "We’re going through it right now. Every team in the league pretty much has gone through it at some point this year. It’s just our turn. We’re going to bounce back."

Golden State’s Klay Thompson finished with 16 points on 6-of-17 shooting, including quite a few shots that were way off, in his return after missing two games with an illness.

"Tough night for Klay," Kerr said. "He needs these minutes to get ready for what's ahead. He's going to have some bumps in the road. Where he's gotten in trouble is he's forcing the issue. He's been trying too hard. You can't blame him. He's been out for 2 1/2 years."

Doncic had 10 rebounds and nine assists, Dorian Finney-Smith scored 18 points and Reggie Bullock and Jalen Brunson added 14 apiece as the Mavericks took the season series 3-1 with the consecutive victories. Dallas got the first win by rallying from a 19-point fourth-quarter deficit with a 26-1 run in a 107-101 win Sunday in San Francisco.

Curry didn't even get off a shot in a scoreless fourth quarter, finishing with 21 points as the Mavericks hounded him at the 3-point line, while Moody hit consecutive 3s to get Golden State even at 104. Jordan Poole scored 23 points.

After Dinwiddie put Dallas ahead, Doncic twice beat Curry in one-on-one matchups with buckets in the lane. Both answered baskets from Moody.

The Mavericks were up six, and Moody hadn't scored yet when officials missed the ball hitting the rim on a shot by Dallas. The shot clock expired just as Doncic was making a pass, thinking it had reset. Arguments from just about everybody on the Dallas bench, including coach Jason Kidd, didn't change the call, and Moody's 3s got the Warriors even.

"We have in the past maybe melted mentally when the ball hits the rim and there's no call," Kidd said. "It just showed growth. I think our maturity level was high. We responded in a positive way."

Thompson scored eight points in a frenetic third quarter, when the Warriors cut a 14-point halftime deficit in half several times only to see Dallas get it back to double figures. Golden State ended up down eight going to the fourth after Doncic missed a step-back 3 at the buzzer. Doncic had 11 in the quarter.

Warriors: Draymond Green was on the bench, missing his 26th consecutive game because of a back injury. The last time he played was the first meeting in Dallas on Jan. 5. ... Andre Iguodala, also out with a back injury, missed his 17th consecutive game. Coach Steve Kerr said it was doubtful Iguodala would play in the remaining two games on the four-game road trip, but his return is getting close.

Mavericks: F/C Maxi Kleber (right ankle), F Marquise Chriss (right knee) and G Trey Burke (left shoulder) were out. ... The Mavericks have won nine of the past 11 meetings in the series, including three in a row in Dallas.

A rough first half for Thompson was punctuated when he hit the side of the backboard on a corner 3 before Doncic beat him with a cross-over, step-back 3-pointer at the other end. Doncic had 24 points at the break, while Thompson was 2 of 8 with six points while missing all four of his 3s.