A big night for Luka lead the Mavs to a big win over the Jazz last night. FOX 4's Mike Doocy has the highlights.

Frustrated the Utah Jazz as well.

The young Dallas superstar had 33 points and 13 rebounds while also being thrown to the court on a hard foul that led to Hassan Whiteside's ejection as the Mavericks routed the Jazz 102-77 on Monday night for a 3-2 lead in their first-round series.

Doncic made his series debut in Game 4 at Utah, when the Jazz scored the last five points in the final 31 seconds for a one-point win that evened the series. He never let Game 5 get close. 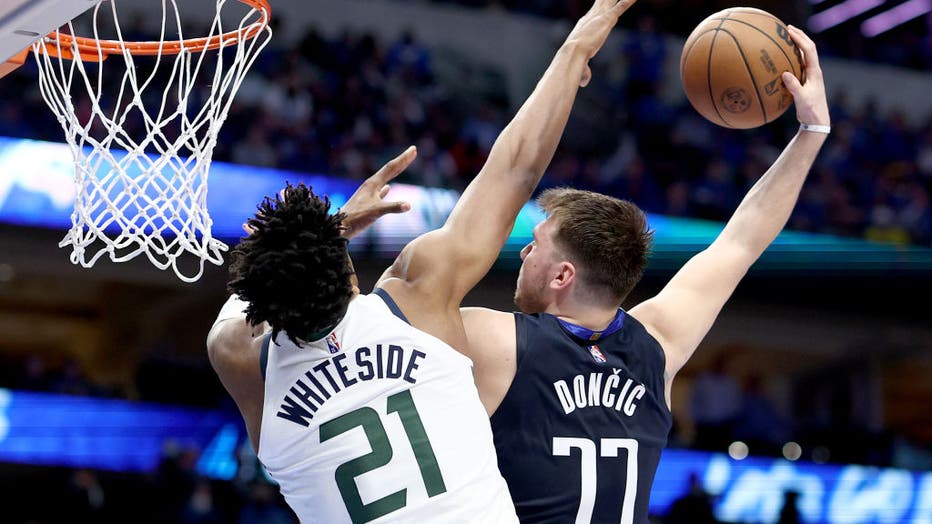 DALLAS, TEXAS - APRIL 25: Luka Doncic #77 of the Dallas Mavericks drives to the basket against Hassan Whiteside #21 of the Utah Jazz in the fourth quarter of Game Five of the Western Conference First Round NBA Playoffs at American Airlines Center on

"For his second game, it looks like he’s been playing this whole series," coach Jason Kidd said. "His conditioning, his effort on the defensive end. As we talk about rebounding, he's one of the best for us and he did that tonight."

After the first four games were decided by eight points or less, Utah never had a chance after a nearly six-minute scoreless drought in the second quarter that fueled a 22-4 Dallas run on the way to a 52-36 halftime lead.

Game 6 is Thursday night in Salt Lake City, with the Jazz regaining their formidable home-court edge, but facing the long odds of just 18% of teams winning a series after dropping the fifth game when the teams split the first four.

The Mavericks haven't advanced in the postseason since winning the 2011 championship. Utah is in the playoffs for the sixth consecutive year, but has yet to get past the second round in that stretch.

Donovan Mitchell, who averaged 30 points in the first four games, scored just nine and missed all seven of his 3-pointers before leaving with a left hamstring injury in the fourth quarter. He will get an MRI on Tuesday.

"They’ve scrambled extremely hard," said Mitchell, who is shooting 20% from 3-point range after being well over 40% the past two playoff years. "It’s a lot to continuously run teams off the line, and they’ve done a good job of it. They’ve made us uncomfortable."

Doncic had already matched Utah's entire output in the third quarter with 19 points when he returned midway through the fourth. Whiteside challenged an attempted dunk and flung Doncic to the court after they got tangled up.

"It was nothing," Doncic said. "It's playoffs, man. There's going to be always attention, but it was nothing. I tried to dunk it. Wasn't successful. These things happen in the playoffs."

Jalen Brunson, who carried most of the offensive load for Dallas when Doncic was sidelined, scored 24 points. Finney-Smith added 13, and Dwight Powell got the crowd going early with all eight of his points on 4-of-4 shooting in the first.

The exclamation point was in the third quarter, when Doncic hit consecutive 3s for a 74-46 lead,

DEJA VU ALL OVER AGAIN

It's the second year in a row for the Mavericks to have a 3-2 lead in the first round. They couldn't finish off the Los Angeles Clippers at home in Game 6 last season, losing the series in Game 7 at LA.

Mavericks: The 77 points were the first allowed by Dallas this season. ... G Frank Ntilikina was available for the first time in the series after being out with a non-COVID-19 illness. He didn't play.