The statue shows the Maverick's great doing his signature one-legged fadeaway. On the statue it says, "Loyalty never fades away."

DALLAS (AP) — Luka Doncic scored 32 points, Tim Hardaway Jr. had 16 of his 26 points in a huge third quarter for Dallas and the Mavericks beat the Los Angeles Lakers 124-115 on Sunday.

Christian Wood added 30 points and tied a career high with seven assists as the Mavericks finished off a celebration of Dirk Nowitzki’s statue unveiling by winning just the second Christmas Day home game in franchise history.

Dallas took its first lead during a 51-point third quarter, the highest-scoring quarter on Christmas in NBA history and a league-best this season. Golden State and Orlando have each had a 50-point quarter. 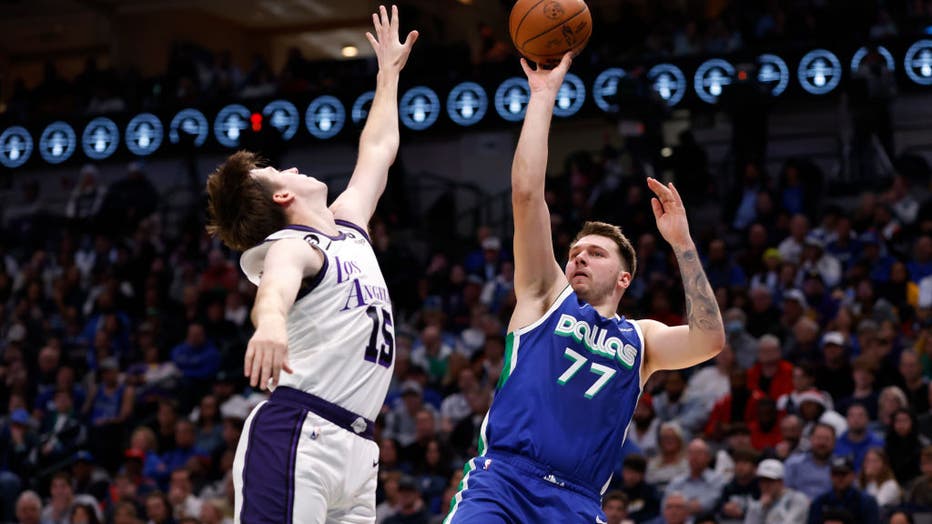 DALLAS, TX - DECEMBER 25: Luka Doncic #77 of the Dallas Mavericks shoots the ball over Austin Reaves #15 of the Los Angeles Lakers in the second half at American Airlines Center on December 25, 2022 in Dallas, Texas. NOTE TO USER: User expressly ackn

LeBron James scored 38 points, one shy of his season high, and the Lakers led by 12 early in the third before the Mavericks took over.

Wood started the surge with a 3-pointer, and Dallas was within one when Doncic had a chance to challenge James at the rim but passed to Hardaway for a corner 3 and the first Dallas lead at 65-63.

The Mavericks, who scored just 43 points in the first half and trailed by 11 at the break, didn’t slow down from there.

Doncic, who had six of his nine assists in the quarter, hit three free throws after a foul and a technical against Russell Westbrook, Hardaway scored inside and out and Wood converted a three-point play to break the 50-point mark.

The Lakers scored the first nine points of the fourth quarter to trim a 19-point deficit to 10, but LA couldn’t get the deficit back under 10 until the final minute.

Dallas lost its other Christmas Day home game 11 years earlier when Nowitzki was the face of the franchise, and the Mavericks were coming off their only championship. Miami won 105-94 in an opener for the lockout-delayed 2011-12 season.

Doncic was called for his sixth foul on a charge against Austin Reaves with 3:50 left, but the call was reversed on replay. Reaves was assessed a blocking foul, and Doncic made both free throws. Doncic had nine rebounds.

Lakers: James’ seven-game run of at least 30 points is the longest active streak in the NBA. ... Westbrook scored 17 points, and Reaves had 16.

Mavericks: Jalen Brunson returns to Dallas with the Knicks on Tuesday. Brunson was drafted in the second round the year Doncic went third overall (2018) and thrived as his sidekick before signing with New York in free agency. The Mavs won the first meeting in New York this month.