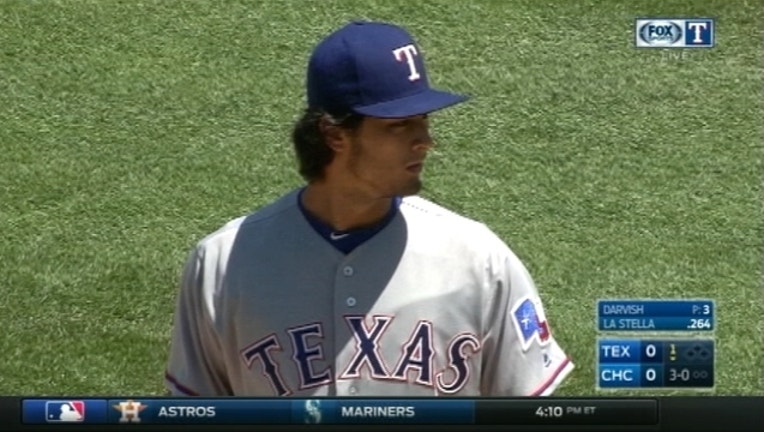 CHICAGO (AP) — Yu Darvish returned from the disabled list to strike out nine but was inefficient and wild at times, and Anthony Rizzo's two-run double helped lead the Chicago Cubs past the Texas Rangers 3-1 on Saturday.

In his first start since June 8 because of shoulder pain, Darvish (2-1) reached 98 mph and allowed only two runs and two hits, but the Japanese right-hander lasted just 4 1/3 innings thanks to four walks and shoddy defense.

Jason Hammel (8-5) struck out seven in six innings for the Cubs, who won their second straight in the interleague matchup of division leaders.

Hector Rondon pitched a perfect ninth to complete the three-hitter for his 15th save.

Darvish, a three-time All-Star, was making his fourth start since missing all of 2015 following Tommy John surgery. A dominant slider dipping out of the strike zone accounted for seven of his strikeouts.

But he was lifted after 90 pitches when second baseman Rougned Odor dropped what could have been an inning-ending double play.