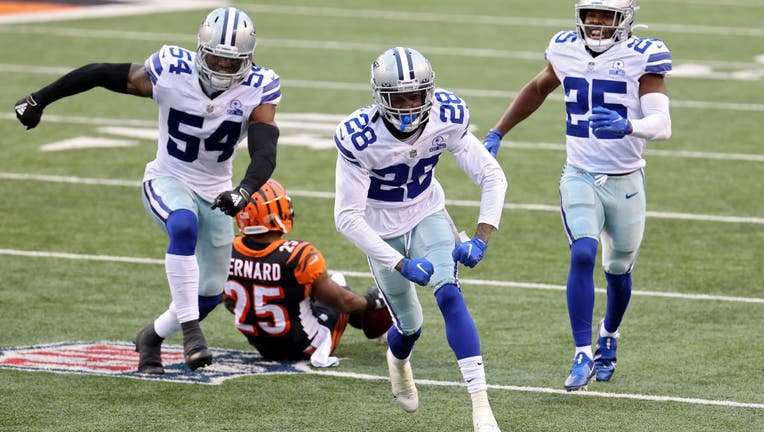 CINCINNATI, OHIO - DECEMBER 13: Rashard Robinson #28 of the Dallas Cowboys reacts in the third quarter against the Cincinnati Bengals at Paul Brown Stadium on December 13, 2020 in Cincinnati, Ohio. (Photo by Andy Lyons/Getty Images)

CINCINNATI (AP) - Andy Dalton was good enough in his return to Cincinnati, tossing two touchdown passes and helping lead the Dallas Cowboys to a 30-7 win over the Bengals on Sunday.

Cincinnati greatly contributed to the cause of its longtime quarterback, who was playing in Paul Brown Stadium for the first time since he was cast aside by the team before the season. The Bengals fumbled the ball away on their first three drives, one fumble returned for a touchdown, and leading to 17 first-half points by the Cowboys (4-9). That was all they needed.

The homecoming for Dalton, the starting quarterback for the Bengals for nine seasons, was the storyline leading up to a game between two injury-plagued teams whose seasons are all but lost.

Dalton was serviceable, going 16 for 23 for 185 yards, as the Cowboys stayed in contention in the weak NFC East. He threw an 11-yard, second-quarter touchdown to Amari Cooper, and hit Tony Pollard for a 7-yard score with 2:00 left in the game.

The Bengals (2-10-1), whose offense has struggled mightily since quarterback Joe Burrow was lost to a knee injury on Nov. 22, got in a hole early and couldn't dig themselves out.

On the first Cincinnati drive, running back Giovani Bernard fumbled for the first time in 830 carries, leading to a Dallas field goal. The Bengals were driving on the next series when running back Trayveon Williams' fumble was recovered by linebacker Aldon Smith and returned 78 yards for a touchdown.

On Cincinnati's third drive, receiver Alex Erickson lost the handle after a hand-off. The recovery by Jaylon Smith set up a 53-yard Dallas drive capped by the Dalton-to-Cooper TD pass.

Cincinnati got within 10 at the end of the first half when Brandon Allen threw an 11-yard touchdown pass to A.J. Green, but that was it.

Dalton was the face of the franchise, led Cincinnati to the playoffs from 2011-15, and holds most of the team's passing records. He was released a week after the Bengals snagged Burrow, the Heisman Trophy winner, with the top pick in the NFL draft last spring.

Dalton signed with the Cowboys as a backup, and stepped in when Dak Prescott went down. He missed time with a concussion and COVID-19, but improved to 2-4 as the starter with the win over his former team.

Cowboys: CB Saivion Smith left with a hand injury in the fourth quarter and didn't return.

Bengals: Allen injured his right leg late in the game and didn't return. Ryan Finley replaced him on the last drive.

The Cowboys host the 49ers next Sunday.

The Bengals get a Monday night home game against the Steelers on Dec. 21.