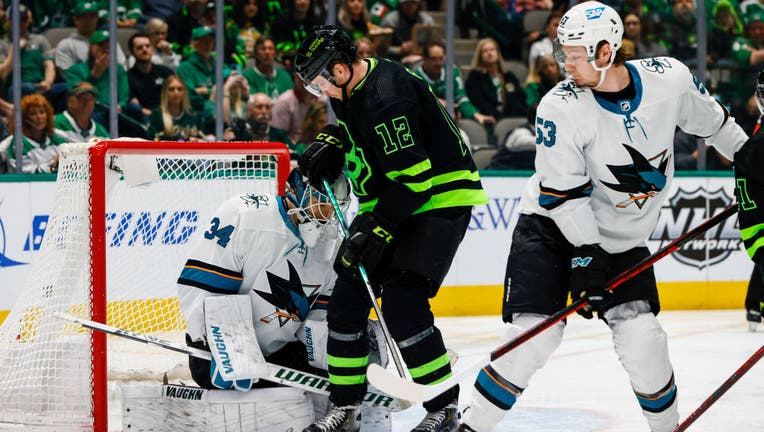 Dallas remained tied with Nashville for the two West wild-card spots at 91 points apiece as both clubs extended their lead to four points over Vegas, a 4-0 loser at Edmonton. The Stars and Predators, who beat Chicago 4-3, have seven games remaining, one more than the Golden Knights.

Jake Oettinger made 23 saves as the Stars extended their home winning streak against San Jose to seven games. Dallas has recorded at least a point in 13 of 17 games over the past month.

"I think it’s key to take it a game at a time right now," Raffl said. "This one was huge tonight, and it wasn’t always pretty. But we found a way to win, and that’s the key in the situation we’re in right now."

Timo Meier had his career best with his team-leading 33rd goal to get the Sharks within 2-1 in the second period. They are 0-6-3 in their past nine games.

Two games after creating several short-handed chances for himself, Luke Glendening skated free out of the defensive zone on the penalty kill and

Meier ended Oettinger's shutout with a wrister in the final minute of the second after the 23-year-old Dallas goalie had stopped several good scoring chances earlier in the period.

"I thought tonight we played exactly how we wanted to play in this building against an urgent team," San Jose coach Bob Boughner said. "We tried to match that urgency early. I thought we did."

The Stars had to kill a late hooking penalty against Jason Robertson and mostly kept Oettinger out of trouble for about 90 seconds of 6 on 5. Jonathan Dahlen had a chance at a rebound in the final minute but couldn't get his feet under him.

Meier hit the post in the first period, when the Sharks also had a loose puck bounce across the crease behind Oettinger.

NOTES: The Sharks were without injured defensemen Erik Karlsson and Radim Simek, who went home. San Jose had just 12 healthy forwards, with five rookies in that group. ... Stars F Vladislav Namestnikov was out for a second consecutive game since leaving a 1-0 victory over Tampa Bay with a lower-body injury. ... San Jose has missed the playoffs a franchise-worst three consecutive years. ... The Stars are tied with Anaheim for the most one-goal games with 37. Dallas is 26-6-5. The Ducks, out of playoff contention, are 13-10-14.

Sharks: The fourth five-game trip of the season ends on a back-to-back Sunday in Minnesota. They were the longest trips and combined to cover nearly half of San Jose's road games.

Stars: A three-game Canadian swing starts Tuesday in Vancouver. It's the final trip of the season.