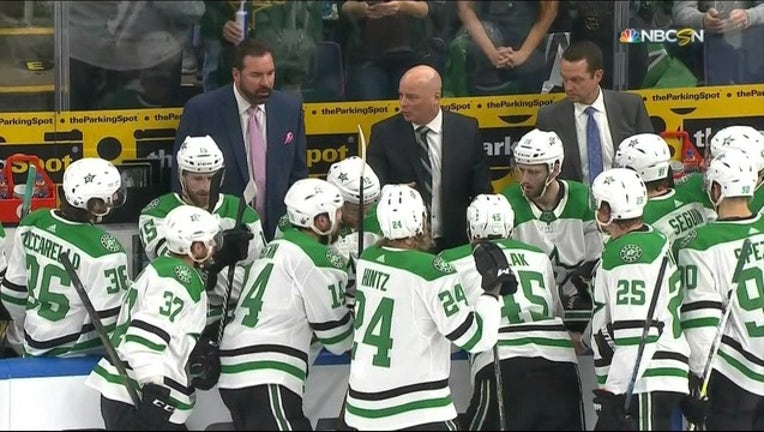 After a double-overtime loss in Game 7 of the Western Conference semifinals, it was hard for the Dallas Stars to reflect on just how far they had come in coach Jim Montgomery's first season and the positive effect it should have moving on to next season.

"Yeah, I'm sure it can," top-line center Tyler Seguin said, though the sting was still fresh after a 2-1 loss in St. Louis.

Bishop had a career-high 52 saves Tuesday night before a puck that ricocheted off the post and the back of his mask fell into the crease and was knocked into the net. That was right after captain Jaime Benn's wraparound attempt that came oh-so-close to being a series-clinching goal for the Stars.

"I know a lot of people wrote us off when it was the All-Star break, and we grew, and we overcame a lot of adversity. So there's a lot to like," Montgomery said. "I think that next year we're going to be able to start in a real good place because there's going to be a lot of familiarity starting next year."

The Stars will still have Bishop, a finalist for the Vezina Trophy that goes to the NHL's top goalie, along with Seguin, Benn and Klingberg. There are several young standouts as well, including 19-year-old defenseman Miro Heiskanen and fast-skating 22-year-old forward Roope Hintz.

Heiskanen and Hintz will no longer be NHL rookies next season, and neither will their coach. Montgomery led the University of Denver to an NCAA championship in 2017 and also was part of a title as a college player.

Montgomery was the third coach in three seasons for the Stars, following grizzled and veterans Ken Hitchcock and Lindy Ruff with their differing philosophies.

There were plenty of adjustments and acquaintances to be made with another new coach, and things didn't always go smoothly at first.

Right after Christmas, long-time team executive Jim Lites profanely ripped high-priced forwards Seguin and Benn about their play. Then in January, Montgomery called out his team over a "culture of mediocrity."

All those feelings have certainly changed after a season that unexpectedly stretched into May, when their 95th game was the longest of the season at 3 hours, 49 minutes. They went to the playoffs for the first time since 2016, when they also lost to the Blues in Game 7 of a second-round series.

"I appreciate how much we grew together as a group, and the effort and sacrifice that they put together," Montgomery said. "We're only going to be better because of this playoff run. That's for sure, we are. The valuable experience that some of our young players got in their first year, and some of the guys that hadn't been to the playoffs ... It's a good building block for next year."

Seguin, a five-time All-Star at 27, would have been an unrestricted free agent this summer if he hadn't signed a $78.8 million, eight-year contract extension last September. That deal through 2026-27 starts next season. He was not named to the All-Star Game for the first time since 2014, but Seguin still matched his career high with 47 assists and his 80 points were the most since 84 in his Dallas debut. He had four goals and seven assists in the playoffs.

The Stars acquired forward Mats Zuccarello on Feb. 23 from the New York Rangers for a conditional second-round draft pick in this year's draft. That would have become a first-round pick had Dallas beaten St. Louis and made it to the Western Conference finals. That deal also included a conditional third-round pick in the 2020 draft. That could still become a first-rounder if Zuccarello, a 31-year-old center who is about to become an unrestricted free agent, re-signs with the Stars. Zuccarello had four goals and seven assists in 13 playoff games.

Before a goal and an assist in his first NHL playoff game, Heiskanen had four game-winning goals while playing all 82 regular season games. He led NHL rookie defensemen with 12 goals and 23 minutes per game, and also had 21 assists. Hintz had five goals and 16 blocked shots while playing 16 minutes a game in the playoffs. Montgomery called him the best forward in the finale.

"He's going to be a great player for us for a long time," Montgomery said.