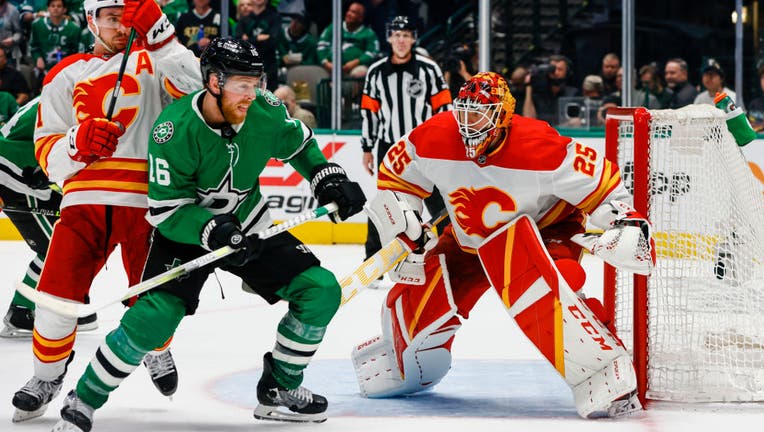 DALLAS, TX - MAY 13: Calgary Flames center Mikael Backlund (11) and Dallas Stars center Joe Pavelski (16) chase the puck in front of Calgary Flames goaltender Jacob Markstrom (25) during game 6 of the first round of the Stanley Cup Playoffs between t

DALLAS (AP) - Joe Pavelski and the Dallas Stars were skating with urgency in the third period. If not, it could easily have been their last one of the season.

Miro Heiskanen scored the go-ahead goal late in the second period and the Stars recovered after blowing an early two-goal lead, beating the Calgary Flames 4-2 on Friday night to force a deciding Game 7 in their first-round Western Conference series.

"The message was we’ve got to have a good third. We haven’t always had good thirds at times with the lead, and we wanted to kind of try to turn that," Pavelski said. "The other night, they came out hard in the third and we didn’t handle it well enough. And tonight was one of those situations where I think everyone bought in. We took a step in the right direction of doing it."

Calgary was in position to close out the wild-card Stars after a 3-1 home win in Game 5 on Wednesday night, when the Pacific Division champions scored all of their goals in the third period.

This series instead is going back to the Saddledome for a deciding Game 7 on Sunday night.

"A hell of a game. We couldn’t get the equalizer," a rather-terse Calgary coach Darryl Sutter said.

With their season on the line, the Stars didn't give in during the third period.

"We went after them instead of sitting back. ... That was one of our better third periods of the year, and it was a timely one," Michael Raffl said.

"That was NHL playoff hockey at its best. That was a great hockey game," coach Rick Bowness said. "Both teams, both goalies, were great."

Calgary will host a Game 7 for the first time since 2006, when it lost its first-round series to Anaheim. This is the third consecutive playoffs that the Stars will play a Game 7 — they beat Colorado in the second round in the NHL bubble in Canada two seasons ago, and lost at St. Louis in a second-round series that went the full distance in 2019.

"We have a confident group," Pavelski said. "Every game’s been tight, been competitive and fun to play in."

Roope Hintz and Raffl also scored for Dallas, and Tyler Seguin added an empty-netter in the final minute. Jake Oettinger, their 23-year-old goalie who had never started a playoff game before this series, stopped 36 shots.

Calgary tied the game at 2 with 8:01 left in the second period on a goal by Mikael Backlund, which came 1 second after the end of what officially went down as another unsuccessful power play in this series when both teams have struggled with a man advantage.

That made the Flames 0 for 2 on the power play in the game, to match Dallas at 2 for 21 in the series.

The Stars made it 2 for 22 midway through the third period when Joe Pavelski had an almost point-blank shot that ricocheted off Markstrom’s skate that was on the line.

"They get two, and we climb back. It’s a tight game but I’d say that 3-2 goal late in the second was tough," Flames center Elias Lindholm said. "Obviously, we’d like to win this game, but it’s a new day tomorrow and a game on Sunday, and that’s why we fought so hard all year to have home ice on Game 7."

Joel Kiviranta was trying to follow up his own shot, even reaching back after skating past the net, while two Calgary skaters and Markstrom all went down on the ice. Defenseman Christopher Tanev was one of the ones down, and tried to push the puck away with his hand before Raffl was able to stuff it just inside the post

Matthew Tkachuk and Gaudreau, both 100-point and 40-goal scorers in the regular season, got off quick shots in succession that had Oettinger scrambling and diving across the crease.

Once the Stars had the puck going the other way, Pavelski had a drop-back pass for the charging Hintz, who sent a quick wrister under the legs of Markstrom.

Tkachuk took a backhander off his knee early in the first period that ricocheted off the post.

Calgary is 5-7 in Game 7s, but has lost six of the last seven it has played. The only Game 7 victory for the Flames since 1990 was in the first round against Vancouver in 2004, before they then advanced to the Stanley Cup Final and lost to Tampa Bay in the seventh game.

Dallas is 6-8, including a Game 7 win over Colorado in the second round of the 2020 playoffs, when the Stars went on to make the Stanley Cup Final in the postseason played in a bubble in Canada because of the pandemic.