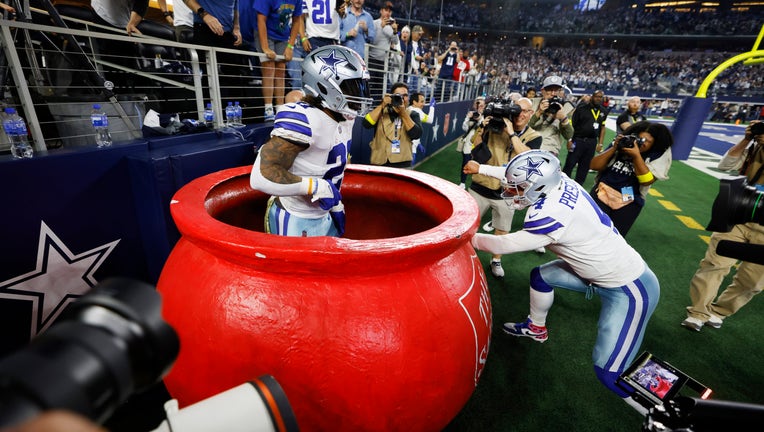 ARLINGTON, TEXAS - DECEMBER 04: Ezekiel Elliott #21 celebrates a touchdown with Dak Prescott #4 of the Dallas Cowboys in the fourth quarter of a game against the Indianapolis Colts at AT&amp;T Stadium on December 04, 2022 in Arlington, Texas. (Ph

ARLINGTON, Texas - Malik Hooker returned a fumble 38 yards for a touchdown against his former team during a 33-point fourth quarter for Dallas, propelling the Cowboys to a 54-19 rout of the Indianapolis Colts on Sunday night.

Dallas led 21-19 entering the fourth when Dak Prescott threw the last of his three touchdown passes. Hooker’s scoop-and-score was the first of four fourth-quarter takeaways by Dallas, all of which led to touchdowns.

The highest-scoring quarter for the Cowboys (9-3) since at least 1991 was just the third time in NFL history a team scored as many as 33 points in the fourth.

Matt Ryan threw his second and third interceptions and lost a fumble during the nightmare finish for the Colts (4-8-1), who fell to 1-3 under interim coach Jeff Saturday and lost for the sixth time in seven games overall.

Michael Gallup had two touchdown catches and CeeDee Lamb the other when he rolled over safety Rodney McLeod Jr. and stayed on his feet as the Cowboys remained two games behind NFL-leading Philadelphia in the NFC East.

After Gallup’s second TD, Hooker scooped up a fumble from tight end Mo Alie-Cox and took off untouched down the right sideline for a 34-19 lead early in the fourth.

Hooker, the 15th overall pick by the Colts five years ago, had an injury-plagued four seasons with the Colts before signing with the Cowboys during training camp last year.

Made aware of the possibility during the week, Prescott said Staubach was his favorite Dallas player. He grew up a Cowboys fan in Louisiana, but well after Staubach’s time.

"There’s certain people that you meet and their energy and just their aura, the way that they carry themselves, is glowing in a sense and that’s who Roger is," said Prescott, who also moved past Danny White (155) for third, finishing the night at 156 TD passes.

Colts: CB Kenny Moore II was inactive after injuring an ankle in a 24-17 loss to Pittsburgh last Monday night.

Cowboys: CB Anthony Brown left the game in the third quarter with an ankle injury and didn’t return.

Colts: After a bye, Indy visits another NFC playoff contender in Minnesota on Dec. 18.

Follow below for updates on the game between the Dallas Cowboys and Indianapolis Colts. Mobile users click here.

How to watch Indianapolis Colts vs. Dallas Cowboys - channel, stream, and more