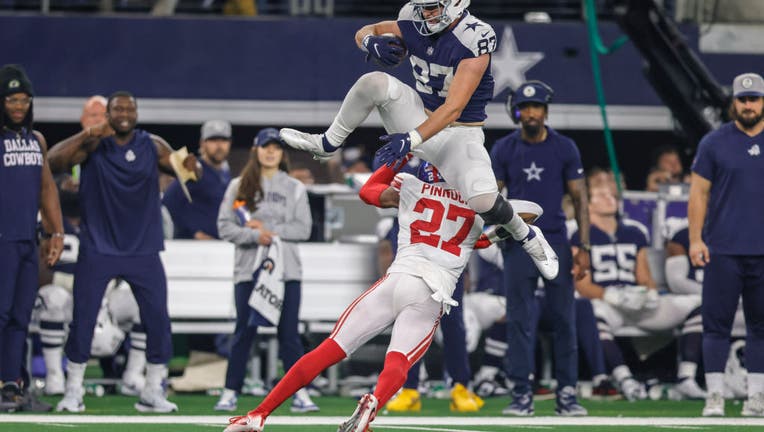 ARLINGTON, Texas (AP) — Jonathan Taylor is the third consecutive elite back the Cowboys are facing in a stretch that started with Dallas’ defense struggling against the run.

The Cowboys won while keeping Minnesota’s Dalvin Cook and Saquon Barkley under control. They’ll try to make it 3 for 3 against Taylor and the Indianapolis Colts (4-7-1) on Sunday night.

Dallas coach Mike McCarthy thinks he has attended two college games in three decades on NFL coaching staffs. One was watching Taylor and Wisconsin against Iowa.

"Just his ability to run inside with the discipline and toughness," McCarthy said. "I think he’s definitely a featured back, and I wouldn’t be surprised if he carries it north of 20 against us."

There’s a peek at one of the keys for the Cowboys (8-3) against Cook and Barkley. They had limited opportunities.

Dallas had the biggest road blowout in franchise history in a 40-3 rout of the Vikings, thus Cook had just 11 carries for the trailing team.

The Giants ran just 59 plays on Thanksgiving, and 35 were passes. So Barkley had just 11 attempts for 39 yards.

"We knew how important it was going to be to be able to set the edge," defensive coordinator Dan Quinn said. "So (we) worked that as much as we could during a short week."

The Colts are facing the short week after a 24-17 loss to Pittsburgh on Monday night, while the Cowboys are on extended break coming off the 28-20 Thanksgiving victory over New York.

Dallas leads the NFL in sacks and will face the offensive line that has allowed the most.

On offense, the Cowboys are among the league’s best in the six weeks since quarterback Dak Prescott returned from a broken thumb on his throwing hand.

It’s the fourth game for Matt Ryan since interim coach Jeff Saturday reinserted him as the starter for the Colts. The 37-year-old is facing the NFL’s top passing defense.

"The one thing I’ve learned is you never know how games are going to shake out," Ryan said. "It doesn’t matter which two teams show up and what you’ve done up until this point. We have a really good defense, too, that they have to go against."

That’s one of Prescott’s points about the Colts, who are 10 1/2-point underdogs, according to FanDuel Sportsbook.

"Very fundamentally sound defense," Prescott said. "As I tell you all the time, we’re not going to get caught up in records or think that we can just walk out there and beat these guys."

The Cowboys will look to continue their winning ways against the Colts.

How to watch: The game is being aired on NBC. The game will be streamed on Peacock.