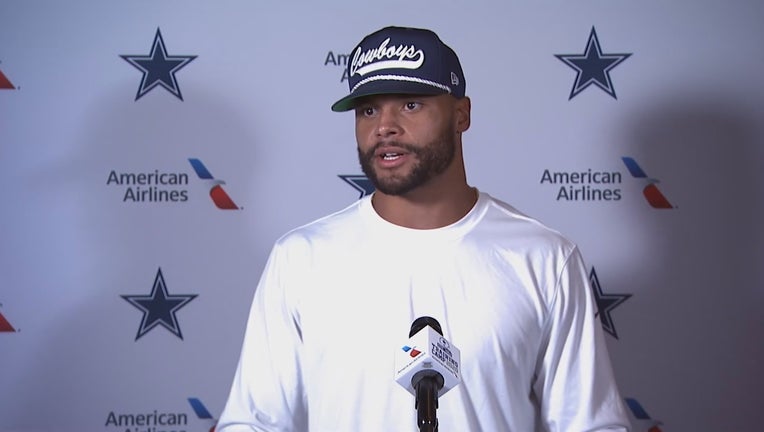 FRISCO, Texas - Dallas Cowboys quarterback Dak Prescott said Wednesday he hopes to eventually sign a long-term deal with the club and he’d support a teammate who wanted to kneel for the anthem.

Prescott’s contract and ongoing social justice issues were the two focal points of his first meeting with the media in months.

Prescott and the Cowboys were unable to work out a deal in the offseason and he'll play under the one-year franchise tag at $31 million for 2020. Prescott is hopeful a longer deal can be reached next off season.

"I love this team. I'm excited about what we can do and accomplish this year. No frustration as far as that. Once again, I believe something will get done, and I also believe I'll be a Dallas Cowboy for the rest of my career,” Prescott said.

Prescott also fielded multiple questions about what he and his teammates planned to do during the national anthem. Cowboys owner Jerry Jones had previously banned his players from taking a knee, but on Wednesday signaled his opinion was evolving.

RELATED: Jerry Jones: Cowboys will use ‘grace’ on anthem question, plan to have fans at AT&T Stadium

Prescott said he’s listening to different viewpoints and hopes he and his teammates can be unified with whatever decision is made.

Ultimately, though, Prescott said he would support a teammate who wanted to peacefully protest and kneel during the anthem.

“100 percent. I mean that’s what this country is about, right? We all have that choice” he said.

Prescott also discussed a letter he recently sent to the governor of Oklahoma and the state’s parole board about a Black man on death row who was controversially sentenced to death in a murder case.

“I've been blessed with an amazing platform and a platform, obviously, to be able to touch and be able to speak and be able to inspire so many different people with my voice," Prescott said. "I think it's important and sometimes I feel obligated to do so.”

Prescott and his teammates will have their first organized practice of 2020 training camp on Friday at The Star.