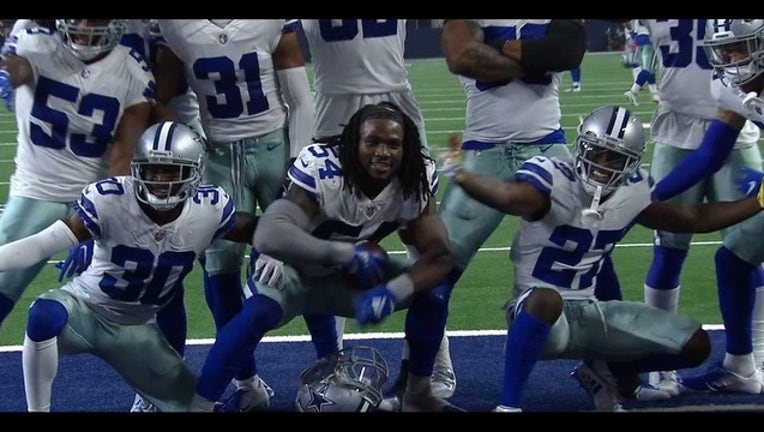 FRISCO, Texas (AP) - Jaylon Smith makes himself presentable for the cameras, then turns to his locker to grab one last thing before starting an interview: the neck pad given to him by hard-nosed defensive coordinator Rod Marinelli to acknowledge the Dallas linebacker's physical style of play.

The former Notre Dame standout is proud of the memento. It still hangs loosely around his neck in front of reporters weeks after he got it, while Smith invariably gets another question about the painstaking recovery from a devastating left knee injury in his final college game.

Smith is doing more than just playing again two years after owner and general manager Jerry Jones gambled early in the draft on a player considered a top prospect before the career-threatening injury.

He has helped the defense surge into the top five while Sean Lee missed three games with a hamstring injury, when the opposite often happened in recent years during the oft-injured two-time Pro Bowler's absences. The Cowboys (3-3) visit Washington (3-2) on Sunday.

"It's just about doing my job and understanding the player that Jerry drafted," Smith said. "He believed in me. The Cowboys organization believed in me, that I would get back to this point of being a top-five pick. It's not a surprise to me. It's expected. It was just a matter of time."

With Lee out, Smith has a key companion in rookie first-round pick Leighton Vander Esch, who leads the Cowboys with 60 tackles while Smith has 57. No other Dallas defender has more than 35.

But the 2015 All-America at Notre Dame is the middle linebacker making most of the calls and displaying leadership skills that attracted the Cowboys to him in the first place, when Dallas and plenty of other teams were wondering if he could play again.

A case in point is also one of Smith's signature plays this season. Before sprinting to the sideline to deliver a hard shoulder hit that stopped Houston quarterback Deshaun Watson on fourth down near the goal line, Smith told DeMarcus Lawrence, "I got you."

That was Smith's way of turning Dallas' star pass rusher loose on Watson, and believing he could clean up the play wherever Watson decided to scramble.

"It's just the trust, the growth and my leadership and my respect on this team," Smith said. "People understanding that they can count on me and this team believes that."

Smith probably wouldn't have done that during his inconsistent debut a year ago, when it was generally acknowledged by coach Jason Garrett and others that he was forced to play too much because of injuries at linebacker and struggled as a result.

This season, Smith is no longer playing with a foot brace designed to help overcome the nerve damage associated with tearing a ligament in his knee during Notre Dame's 44-28 loss to Ohio State in the Orange Bowl on New Year's Day 2016.

Marinelli says Smith's change of direction and lateral movements are the biggest differences from last season.

"And he's more comfortable," Marinelli said. "Sometimes a guy can look a little bit slower, or hesitant when you don't really know what you're doing. It's our job is to make the complex simple for them, the irregular regular so they can see it and play fast. It takes time to do that."

Marinelli's schemes haven't been big on blitzing since he came to Dallas, but Smith's skills and the aggressive philosophy of new passing game coordinator Kris Richard have changed that.

Smith is second to Lawrence with three sacks and has eight QB pressures - three more than the rest of the Dallas linebackers combined.

"He might be one of the better blitzing linebackers I've been around," Marinelli said. "He's physical. He's fast. He is playing lights out."

Asked if the play on the goal line against Watson could be one of those definitive moments in Smith's development, Garrett shot back, "Which one?"

That was Garrett's way of saying the Cowboys have seen plenty of big plays from Smith this season. Smith says the same thing. And it fits with Garrett's feeling that there was never one moment where he said to himself, "Jaylon Smith is back."

The Cowboys knew more about Smith's injury than most because team physician Dr. Dan Cooper performed the surgery. Garrett has always stopped short of calling that the primary factor in their decision to draft him.

"We heard so many great things about him as a guy," Garrett said. "Anybody who has any chance of coming back from an injury like he had, it really started there, the kind of person he is. I think that's shown through here the last couple of years."

It used to show behind the scenes at the Cowboys' facility. Now it's showing on the field.