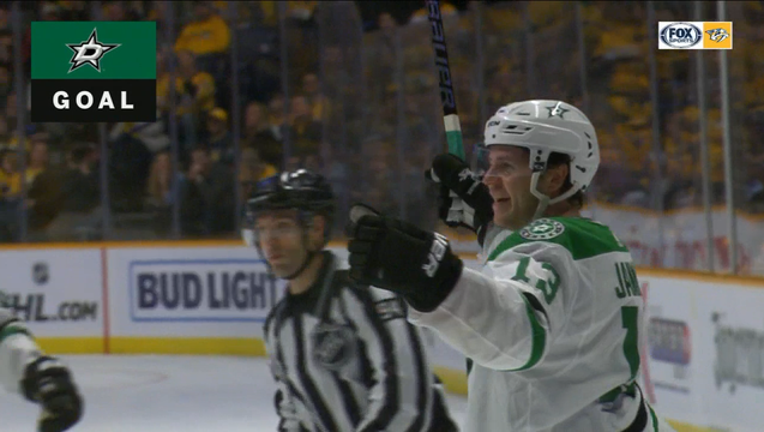 Anton Khudobin is making himself at home in Nashville.

After making 49 saves in a Dec. 27 shutout in Nashville, Khudobin was again excellent, setting up Comeau's and Janmark's decisive goals.

Tyler Seguin also scored for Dallas, which has won four straight. Radek Faksa and Esa Lindell each had two assists.

"I thought we got better as the game progressed," Dallas coach Jim Montgomery said. "Nashville came at us in the first and I thought we weathered it really well. I just love how our group has matured with handling of moments of when the other team has momentum. We bend but we don't break."

Calle Jarnkrok scored for Nashville, which had its three-game winning streak snapped.

With time winding down, Comeau beat Pekka Rinne low to the stick side at 15:47. Nashville challenged the goal for goaltender interference, but after a brief review, it was allowed to stand.

"I dumped it in and Faksa did a great job of winning the race to the puck," Comeau said. "Came around the net and he gave it to (Janmark) and I just tried to go to the net. I actually thought (Janmark) was going to shoot and he made a great pass."

Janmark collected the rebound of Faksa's shot and put it behind Rinne 43 seconds later.

"When the game was on the line, 1-1 game ... personally for me, somehow I've got to be better," Rinne said. "It's been up and down the last little while here."

Jarnkrok scored the game's first goal at 9:35 of the opening period. Inside the Dallas blue line, Ryan Hartman sent a pass to Jarnkrok in the high slot. He moved to the right circle and fired off of a wrist shot that hit off of the left post and in behind Khudobin.

Seguin tied it 1:36 later. Lindell fired the puck into the Nashville zone on the left boards. It reached former Predator Alexander Radulov on the right boards, where he turned and passed to Seguin above the right circle. He beat Rinne low to the glove side.

After scoring twice in Friday's home victory over Minnesota, Seguin has four goals in his last four games.

Seguin's goal was one of just four shots the Stars got on goal in the first.

The Predators were 0 for 4 on the power play. They have failed to score a man-advantage goal in their last nine games, going 0 for 31.

"I thought in Vegas (two games earlier), we were doing some good things," Nashville coach Peter Laviolette said. "We had lots of looks. We hit the post a few times. It wasn't as clear tonight."

Notes: Prior to the game, the Predators honored former forward Jordin Tootoo, who retired from hockey earlier in the season. ... Jarnkrok has four points in his last five games against Dallas. ... The Stars are 7-13-2 when their opponent scores first this season. ... Dallas has won both matchups between the two teams in Nashville this season and the teams play again in Music City Thursday.