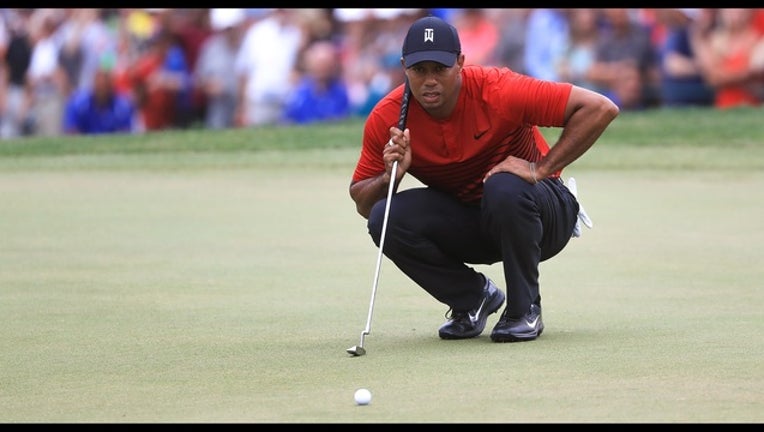 Tiger Woods looks over a putt on the 18th green during the final round of the Valspar Championship at Innisbrook Resort Copperhead Course on March 11, 2018 in Palm Harbor, Florida. (Photo by Sam Greenwood/Getty Images)

PALM HARBOR, Fla. (AP) - Right when Paul Casey felt he was a winner in the Valspar Championship, he looked up at the TV and saw a scene that was all too familiar.

Tiger Woods, red shirt blazing on Sunday, holed a 45-foot birdie putt on the 17th hole at Innisbrook that pulled him to within one shot of the Casey's lead. Moments later, Woods settled over a birdie putt from just inside 40 feet that would have forced a playoff.

A long victory drought on the PGA Tour ended Sunday, just not the one most people - Casey included - were expecting.

Casey rallied from five shots behind. He ran off three straight birdies early on the back nine, closed with a 6-under 65 and won by one shot when Patrick Reed had a 45-foot putt roll back to his feet on the 18th hole, and Woods came up a few feet short of a birdie putt on the final hole.

After Woods signed for a 1-under 70 - his first time since August 2013 that he tied for second with all four rounds under par - he worked his way toward Casey to congratulate him on his first PGA Tour title since the Houston Open in 2009, a span of 132 starts.

"It's the only time he's congratulated me immediately after a victory," Casey said. "Normally, it's the other way around. That's something special. Just really cool. I'm sure he was disappointed he didn't get the victory. I actually thought he was going to win today before the round started. I thought it was just teed up beautifully for him. I said a couple times, 'If I don't win this thing, I actually want Tiger to win it.'

Woods opened with a two-putt birdie to briefly tie for the lead. That was his last birdie until he revved up the raucous crowd with his long birdie on the 17th, giving him his best chance to win since his back problems began not long after his most recent victory, the Bridgestone Invitational in August 2013.

This was his fourth PGA Tour event since returning from his fourth back surgery. He is getting better with each tournament, though he didn't feel sharp with his irons on Sunday and played too often to the fat of the greens.

"I had a good shot at winning this golf tournament," Woods said. "A couple putts here and there, it could have been a different story."

Two shots behind going to the back nine, with Casey running out of birdie chances, Woods failed to birdie both par 5s. He pulled a wedge into the left rough on No. 11 and three-putted from 80 feet on No. 14. He failed to make a pair of birdie putts from the 15-foot range.

And then he showed up with one big putt, looking very much like the Woods of old who lingers long enough to make his opponents worry.

Casey, who finished at 10-under 274, goes up to No. 12 in the world with what he called one of the most rewarding of his 16 victories worldwide.

"Probably more satisfying, the fact that it was on a week where Tiger played some good golf and got to see some amazing stuff and hear the roars and it just was a great week - the buzz, everything about it," Casey said.

Reed, who closed with a 68, had a better chance at winning than Woods, and the disappointment was clear.

He tied for the lead with a birdie on the par-5 14th, and he hammered a tee shot on the uphill 18th that left him a wedge to the green. He thought he flushed it. He twirled his club. But the ball came down the slope, leaving him about 45 feet away up the ridge.

The first putt, which had to travel across a section of the fringe, was so short that it rolled all the way back to his feet. Reed used a wedge for the next one and came close, though it was never on line.

"It happened to be unfortunate it got around the corner of the green where I was on the green, had to go over the fringe, through about 7 feet of fringe and back on the green, and I thought I could putt it," Reed said. "I gave it extra because I knew it was going to either pop or come out slow. I just didn't hit it hard enough."

Woods played conservatively with an iron off the 442-yard, uphill closing hole on the Copperhead course. From 185 yards, his 7-iron came up some 40 feet short, and his birdie putt to force a playoff was 2 feet short.

Next up for Woods is the Arnold Palmer Invitational at Bay Hill next week, which he hasn't played since winning five years ago. He is an eight-time winner at Bay Hill, and the euphoria over his return is sure to reach even higher decibels.

"I felt very comfortable. My game was quite solid this entire week," Woods said. "As a whole I felt very good about what I did this week."

Corey Conners, the Canadian rookie who started the final round with a one-shot lead, fell back quickly after opening with a bogey on the easiest hole at Innisbrook. He shot 77 and tied for 16th. Justin Rose, among six players who had a share of the lead at some point in the final round, had back-to-back bogeys on the back nine and never atoned for his mistakes. He closed with a 72 and finished three shots behind.

That left Casey the winner, finally.

Woods has to wait at least another week, with the next stop at a golf course Arnold Palmer built and Woods used to own.