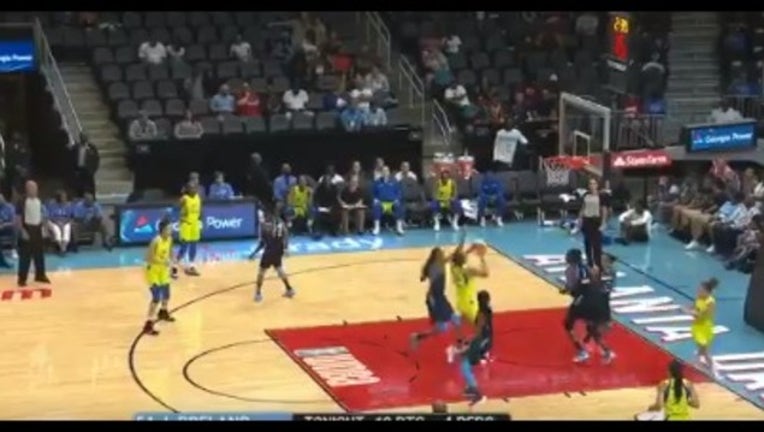 ATLANTA (AP) - One year after a stout defense helped Atlanta advance to the WNBA semifinals, the Dream turned to that strength to help cap a comeback in their 2019 opener.

Jessica Breland scored 17 points, including a late go-ahead three-point play, and Atlanta held Dallas without a field goal in the final 2 minutes as the Dream rallied to beat the Wings 76-72 on Friday night.

"At the end of games she trusts us to get stops," Williams said.

"It was ugly but I think we did what we do and that's battle," Collen said. "... It took a little while to get everyone on the same page, but we just don't give up."

Renee Montgomery had 15 points for the Dream.

Allisha Gray had 14 points off the bench to lead Dallas. Rookie Arike Ogunbowale had 12 points. Another rookie, Brooke McCarty-Williams, had eight points and eight assists.

Imani McGee-Stafford's layup gave Dallas a 67-65 lead. McCarty-Williams' steal set up Gray's layup, stretching the lead to four points. Another steal by Gray set up her free throws for a 71-65 advantage.

Following a 3-pointer by Montgomery, Brittney Sykes made two of three free throws and grabbed the rebound on the miss to set up Breland's go-ahead three-point play with 1:17 remaining.

The Dream led 20-14 before the Wings scored the final five points of the first period to launch a 15-0 run for a 29-20 advantage. McGee-Stafford's offensive rebound and basket capped the run.

Sykes' 3-pointer snapped Atlanta's scoring drought, but Dallas led 39-34 at halftime. Every Wings player in uniform scored in the half, including five players off the bench.

Marie Güilich scored all of her six points in the final quarter to help Atlanta rally. Tiffany Hayes, a first-team all-WNBA selection last year, scored only five points while making only two of eight shots from the field. She missed each of her four 3-point attempts.

The Dream are without two-time league scoring champion Angel McCoughtry, who was not in uniform but sat on the bench as she continues to recover from a left knee injury late in the 2018 season. Collen recently described McCoughtry's status as "month to month."

The Wings must regroup after trading 6-foot-8 Australian Liz Cambage to Las Vegas on May 16 for Moriah Jefferson, Isabelle Harrison and the Aces' first two draft picks in 2020. Cambage was the runner-up to Breanna Stewart in last season's WNBA MVP vote.

Dallas also is without All-Star guard Skylar Diggins-Smith, who gave birth this spring.

Following two seasons at Georgia Tech, the Dream have returned to State Farm Arena, also the home of the NBA's Atlanta Hawks. Before a two-year renovation, the facility was called Philips Arena.