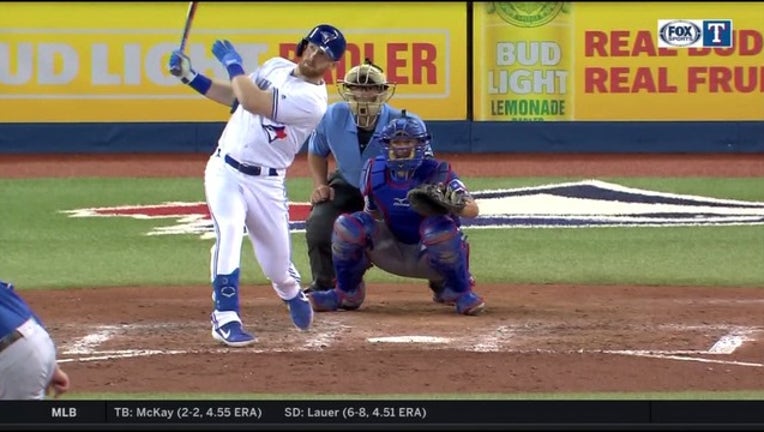 He hasn't seen much in two tough losses to Toronto.

The Rangers have lost six of seven, a stretch in which they've been shut out twice and scored more than three runs just once.

"We've got to gather as a unit and figure out a way to solve this," Woodward said. "This is a good hitters park. These guys aren't the Houston Astros. We need to do a better job of taking advantage of situations."

Texas used two walks and a double to load the bases with one out in the first against opener Wilmer Font, but Hunter Pence popped up and Rougned Odor struck as the Rangers failed to capitalize.

"I would have put my money down that we were at least going to get one of those runs in, and we didn't," Rangers outfielder Delino DeShields said. "That's just the way things are going for us right now and it's frustrating."

Hernandez and McKinney connected off right-hander Shawn Kelley in the sixth. It was the 11th time this season the Blue Jays have hit back-to-back home runs, matching the 1999 team record.

The shutout was Toronto's sixth, doubling their total from 2018.

Font struck out two and allowed one hit in two innings before making way for left-hander Thomas Pannone (3-5), who worked four shutout innings.

Left-hander Tim Mayza handled the seventh, right-hander Derek Law pitched the eighth, and righty Ken Giles finished for his 15th save in 16 opportunities.

Giles, who has been bothered by a sore elbow, pitched for the first time since Aug. 7 at Tampa Bay, when he allowed three hits and two runs in one inning but still earned the save in a 4-3 victory.

Rangers right-hander Lance Lynn (14-8) allowed one run and four hits in five innings, his shortest outing since going 3 1/3 innings at Oakland on April 23. Lynn matched a season high by walking three and struck out six.

"That lineup battled, fouled some stuff off, and had some deep at bats," Lynn said.

Lynn was not beaten in consecutive starts over his first 19 appearances but has lost back-to-back outings twice in his past six starts.

Grichuk opened the scoring by homering off Lynn to begin the second, his 22nd of the year and second in two games.

The Blue Jays loaded the bases with one out in the fourth but couldn't add to their lead. Brandon Drury popped out and Rangers center fielder Delino DeShields made a great catch on Reese McGuire's drive to the warning track. DeShields fell back into the wall after making the play, banging his head and neck at the base of the fence.

"I really didn't know how far I was from the wall," DeShields said. "That's kind of why I jumped up and turned, to brace myself. I wasn't really close to it and that's when I lost my balance and fell backwards."

DeShields stayed down for several moments and received attention from the trainer before getting up to a round of applause and walking off unassisted. He remained in the game.

"It didn't feel good, but I've got a football mentality: get up," DeShields said. "I don't like getting taken out of the game, for anything."

Grichuk also homered on his birthday in 2016, connecting off Cubs RHP Joe Smith.

Font opened for Toronto for the third time in seven games.

Rangers: LHP Kolby Allard (0-0, 4.15) will make his second start of the season in Wednesday afternoon's series finale. Allard struck out a career-high seven in his previous start, Aug. 9 at Milwaukee.