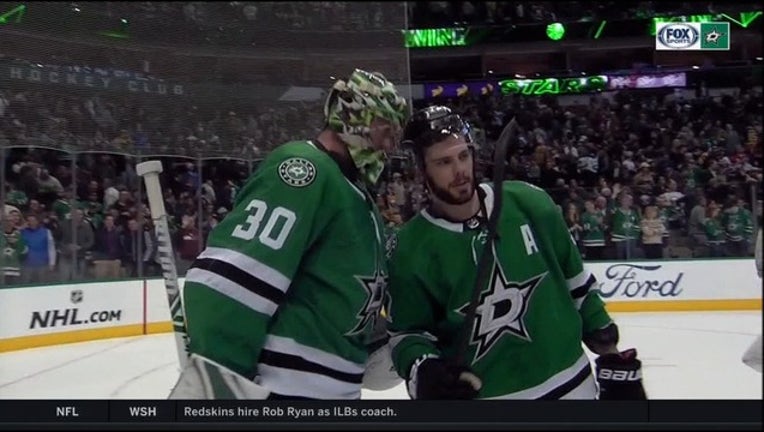 Bishop made 13 saves in the third period, getting his third shutout this season and 27th of his career.

Benn scored 8:39 in off a pass from former Sabre Taylor Fedun. Benn stickhandled to the front of the net, put the puck on his forehand and sent a wrist shot inside the right post.

Buffalo appeared to have a goal 4:28 into the third when Marco Scandella's shot from the left point went over Bishop and into the net. The goal was disallowed because a referee ruled that Nathan Beaulieu had interfered with Bishop. Buffalo challenged the call, but a review upheld the decision.

Dallas maintained position for the first wild card from the Western Conference.

Buffalo fell to three points behind Columbus for the second wild card in the Eastern Conference. The Sabres have 56 points to 59 for the Blue Jackets, who were knocked out of third place in the Metropolitan Division by Pittsburgh's win over Tamp Bay on Wednesday.

Benn nearly had a second goal in the first minute of the second period, but Ullmark turned away a backhand deflection off Benn's stick.

NOTES: Benn's team-leading 19th goal was his first in five games. ... D Rasmus Dahlin played for the first time in the arena where Buffalo selected him first overall in the 2018 draft. He scored six goals in his previous seven games. ... On the second night of a back-to-back, 36-year-old RW Jason Pominville was a healthy scratch for the Sabres for the first time since April 4, 2006. ... Buffalo had not been shut out since the season-opening 4-0 loss to Boston. ... The Stars entered the game with three straight wins over Buffalo. ... Dallas improved to 2-3 on the current homestand. ... Each team had only one penalty, both in the first period.

Sabres: Begin a team-record-tying seven-game homestand on Friday against Chicago.

Stars: Play the last of six straight home games, their most this season, on Friday vs. Minnesota.