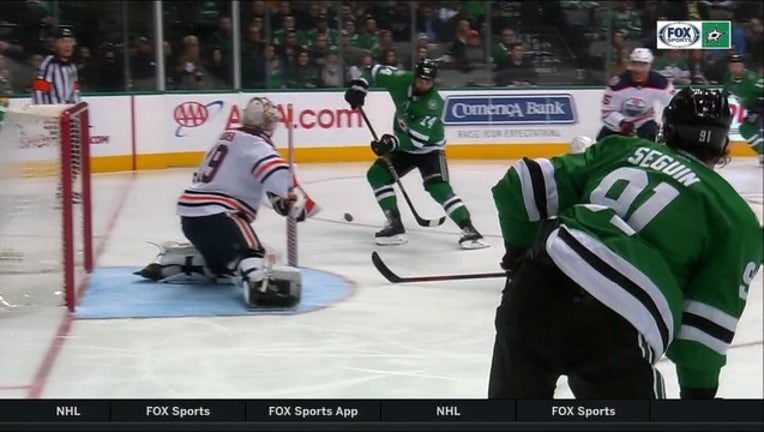 Jujhar Khaira spoiled Khudobin's shutout bid with 5:24 left in the third and Mikko Koskinen finished with 21 saves as the Oilers snapped a three-game win streak. Edmonton's streak started with a 1-0 overtime win at home over Dallas last Tuesday.

Benn scored his team-leading 12th goal on the power play at 7:24 of the third period, tipping a pass from Gavin Bayreuther past Koskinen to push the lead to 3-0. The Stars had been 2 for 29 with a man advantage over the previous 10 games.

Lindell capped the scoring with an unassisted, short-handed, empty-net goal with 2:14 left by sending the puck the length of the ice with the Oilers skating 6-on-4.

The Stars' first goal came at 10:59 of the opening period. Ritchie dug the puck out of the left corner to Janmark in the left faceoff circle. Janmark passed across to Dickinson at the right of the net for an easy snap shot into the open right side of the net for his ffith.

Each team had a good scoring chance in the second period, but neither scored. Khudobin stopped a wrist shot by Jesse Puljujarvi, who then took the rebound and hit the crossbar. On a 2-on-1 during the period's only power play, Dallas' Tyler Seguin kept the puck but hit the crossbar behind Koskinen.

At 1:51 of the third period, Janmark passed from the slot across to Ritchie to the left of the net. Ritchie scored his first goal of the season by fitting the puck between Koskinen and the left goalpost.

NOTES: Edmonton C Connor McDavid and C Ryan Spooner missed the game because of illness. ... Oilers coach Ken Hitchcock returned to Dallas for the first time since coaching the Stars last season. The Edmonton native took over the Oilers on Nov. 20. ... The Stars are 8-0-1 vs. Pacific Division this season, including 1-0-1 vs. the Oilers. ... The teams' final meeting will be on March 28 at Edmonton.

Oilers: At St. Louis on Wednesday night in the second game of a two-game trip.