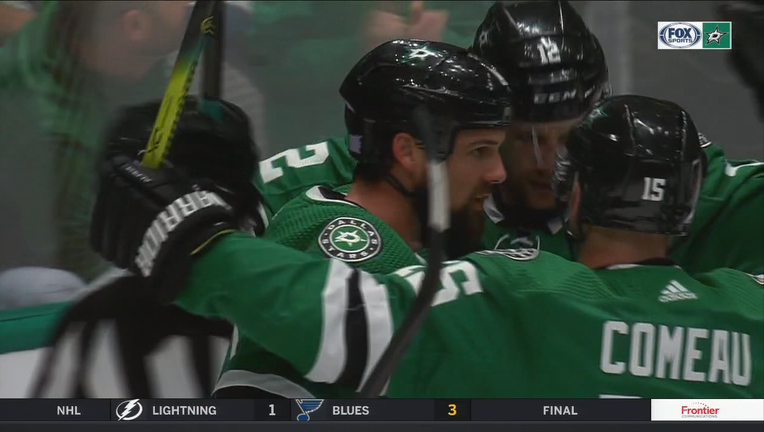 DALLAS - Jamie Benn knows why the Dallas Stars have emerged as one of the NHL's hottest teams following a dismal start.

"Guys are coming out of their shells," he said.

"Everyone is contributing," Benn said. "That's why we're successful as of late, and we're going to continue doing that."

Benn, the team captain, has been joined in on the surge. After scoring one goal in his first 20 games, he has scored three in the last two games.

Another spark has been Justin Dowling, who after going without a goal in his first 34 NHL games has scored three in the last four on a line with Benn and Tyler Seguin.

"They're super easy to play with," Dowling said. "They're elite players. I think you could plug anyone in right now to play with them. I'm fortunate enough to be the guy right now."

"It's important that you have players like Taylor Fedun and Dowling that are able to produce," Stars coach Jim Montgomery said. "Wave after wave is the way we like to play. Right now, we're playing that way. We just have to maintain this because we know that the other side is not so much fun."

Bo Horvat scored the Canucks' goal in the second period against Ben Bishop, who made 32 saves. Vancouver goalie Jacob Markstrom stopped 25 shots. The Canucks are 1-5-1 in the last seven games.

"We weren't very good all night," Canucks coach Travis Green said. "The other team came out with a purpose."

The Stars killed all five penalties against them, including a 5-on-3 in the second period.

Dowling had a goal disallowed 1:26 into the game. Tyler Seguin sent a pass from the top of the right faceoff circle to the left of the goal for Dowling, who tipped the puck in off Markstrom. Vancouver's video challenge showed the play had been offside.

Benn scored for real at 7:53 of the first period, skating into the slot and sliding a backhand between Markstrom's legs

"You just kind of take advantage of what they give you," Benn said. "It's kind of a lucky goal."

Benn's second goal came on the power play at 9:59 of the second period. Perry's shot went off Markstrom's left pad to Benn at the right of the goal for a wrist shot over the goalie's left shoulder.

Horvat pulled the Canucks within 2-1 on a breakaway with a wrist shot into the left side of the net at 11:24.

Fedun started the play for the third Dallas goal, his first this season, by gaining the puck in the Stars' end. He finished it by putting in his own rebound from the right of the net.

Heiskanen, Dowling and Perry scored in the first 8:29 of the third period to put the game away.

NOTES: The Stars' six goals tied both their season high and the Canucks' most goals against this season. ... Vancouver came in with a three-game winning streak at Dallas by a combined score of 13-3. The Stars' previous home win over the Canucks had been 2-1 on Nov. 25, 2016. ... Missing at least their fourth game in a row because of lower-body injuries were Stars team leader in goals Roope Hintz (six games), D John Klingberg (five) and F Mattias Janmark (four). ... In Dallas RW Nick Caamano's 12th NHL game, he picked up his first assist on Fedun's goal. ... The Canucks entered tied with Edmonton for the league lead with 21 power-play goals.

Canucks: Play Thursday at Nashville in the second of a six-game trip.

Stars: Host Winnipeg on Thursday in the second of four games in a row at home.