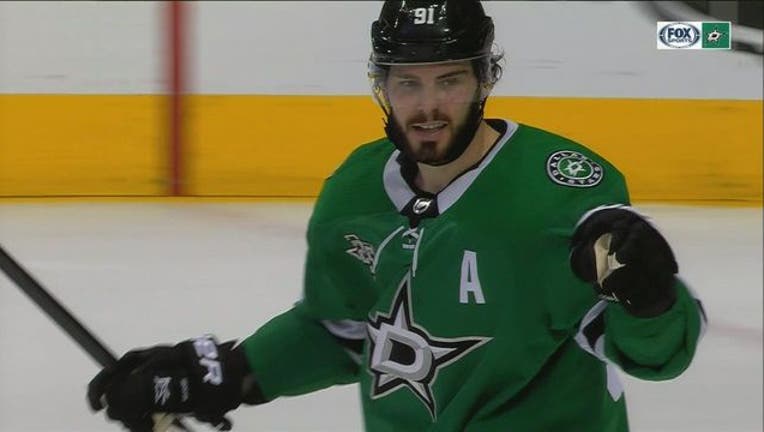 DALLAS (AP) - The Dallas Stars needed a big performance from goaltender Ben Bishop to maintain their position in the playoff race, and they got one.

Bishop made 38 saves, and Dallas blanked Calgary 2-0 on Tuesday night for his 24th career shutout and fifth this season.

"Ben was great, and he did an outstanding job," Stars coach Ken Hitchcock said. "Held us together and it's two points."

Those points allowed the Stars to remain in the first Western Conference wild card spot and prevented Calgary, which sits just outside the second wild card position, from moving ahead of them.

"There were some chances," Bishop said, "but I think the guys did a good job of just a one and done. There (weren't) too many sustained chances there where they were getting two, three whacks. Sometimes you've got to come up and make the saves."

Bishop made 17 of them in the second period, when Dallas increased its lead to 2-0 on a power-play goal by Tyler Seguin, his 32nd.

Devin Shore scored the first goal with just 39 seconds left in the first period. He skated past Calgary's Dougie Hamilton to the left faceoff circle and lifted a wrist shot over goalie Jon Gillies.

Bishop's best work was during a Calgary 5-on-3 power play that lasted 1:55 midway through the first period. The Flames managed only two shots on goal but had other good chances.

Calgary came into the game with nine power-play goals in the previous six games but missed on all six man advantages.

"We had to get something on the power play, especially that 5-on-3," Flames coach Glen Gulutzan said. "I saw what it did to their bench. Their crowd obviously recognizing a good kill, and I thought they got a little energy from it when it didn't happen.

"Bishop was really good tonight. We had a lot of chances. We just couldn't get anything by him."

Midway through the second period, Seguin scored on the power play, taking a cross-ice pass from Jamie Benn low in the right circle. Seguin beat goalie Jon Gillies with a wrist shot into the upper right corner.

"He gave us a chance," Gulutzan said. "I thought they made a real nice play on the first goal, and even the second goal, if Seguin gets a shot from there on the east-west pass like that he's not going to miss too many times."

On the Stars' third power play of the second period, Bishop stopped 3-on-2 and 2-on-1 short-handed rushes by the Flames.

"What did we give up?" Hitchcock said. "Thirty scoring chances?

"We need a lot better play by a lot more people."

Shore's goal was his first in 11 games.

"The puck was coming up the wall and it kind of seemed there was nobody on Dan Hamhuis's side. Remi Elie won his battle in their zone and it was a nice pass by him to come right out to me," Shore said. "I was gonna shoot and did a quick fake, and it went in."

NOTES: Bishop's 38 saves were his most in a shutout this season. His best save total for any game this season is 39. ... Dallas LW Antoine Roussel went off for interference in the first period, bringing his penalty minutes over 100 for the fifth time in seven seasons. Five seconds later, D Marc Methot joined Roussel in the penalty box. ... Gillies had won his first three decisions, including the two games before Tuesday. ... The Stars had been 1 for 20 on the power play over eight-plus games before Seguin's goal. ... Calgary was 9 for 21 with a man advantage in the previous six games. . Each team had seven minor penalties.

Flames: Complete a two-game trip on Wednesday at Colorado.

Stars: Play the third in a five-game homestand on Thursday against Tampa Bay.