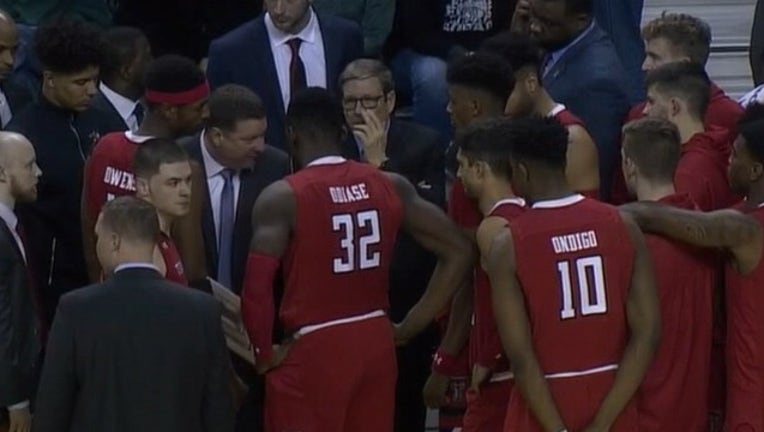 WACO, Texas (AP) - Freshman guard Jared Butler was a late arrival at Baylor. The top recruit originally chose Alabama and began last summer there, before he got his release, and a waiver to play somewhere else this season.

Butler is now starting and getting comfortable in the Big 12.

"He was fearless, played with courage, looked like he was having a lot of fun out there," Texas Tech coach Chris Beard said.

Butler scored 19 points, 14 of them after halftime, and had five assists with only one turnover as Baylor beat the No. 8 Red Raiders 73-62 on Saturday, handing Tech its second loss in four days.

After Texas Tech scored 11 in a row to get within a basket, Butler hit a 3-pointer with 4 1/2 minutes left before Tech's Jarrett Culver then had a short shot roll off the rim no good. Butler then drove for a layup that turned into a three-point play after he was fouled.

"I've been playing for so long. I've just got to trust my instincts and things like that," Butler said. "I love playing with these guys. They bring me joy. It was a big game."

The Red Raiders (15-3, 4-2 Big 12), coming off a home loss to Iowa State on Wednesday night, are still tied for the Big 12 lead after No. 7 Kansas lost earlier Saturday at West Virginia. Iowa State and Kansas State won, creating a four-way tie for the league lead.

Culver led the Red Raiders with 19 points and nine rebounds. Brandone Francis had 14 points and Davide Moretti had 13 .

After Texas Tech raced out to a 23-10 lead in the first 9 1/2 minutes, Baylor went ahead to stay with a 23-6 run. Four Bears, including Butler, made 3-pointers in that span while Tech went more than 10 1/2 minutes without making a field goal.

Baylor led 33-31 before Butler scored the first eight points for the Bears out after halftime. It was 41-33 after King McClure stole the ball from Culver and passed ahead to Butler for a breakaway layup.

"Being put in a role when one of the big parts of our team goes down, I felt a need of better play of mine," Butler said. "Also me being a freshman, you have to get in a groove and the game slows down for you as the season goes on. That factor and me needing to step up came at the right time I feel like."

Texas Tech: The Red Raiders had been the only Big 12 team without a conference loss before this week, and their only loss before that was against No. 1 Duke. They had 17 turnovers at Baylor.

Baylor: This was the most lopsided Big 12 game for the Bears after the first five were decided by five points or less. Baylor also won at home against Texas Tech last season when the Red Raiders were a Top 10 team.

Francis was called for a flagrant foul with just under 2 minutes after officials looked at replay to review an intentional foul call. "I've coached that kid for three years, he's not a dirty player, he made a play on the ball," Beard said.

Division III transfer Freddie Gillespie made both free throws for a 67-60 lead. That was among the 10-of-10 free throws Baylor made in the last 2:10.

Baylor played its annual Immortal Ten game, remembering the victims of the 1927 accident when 10 of the 22 players, coaches and fans on the team bus were killed when it was hit by a train when traveling to Austin, Texas for a game. Baylor players won the last names of the Immortal Ten on the backs of their jerseys.

Texas Tech plays on the road for the third time in four games Tuesday night at Kansas State.