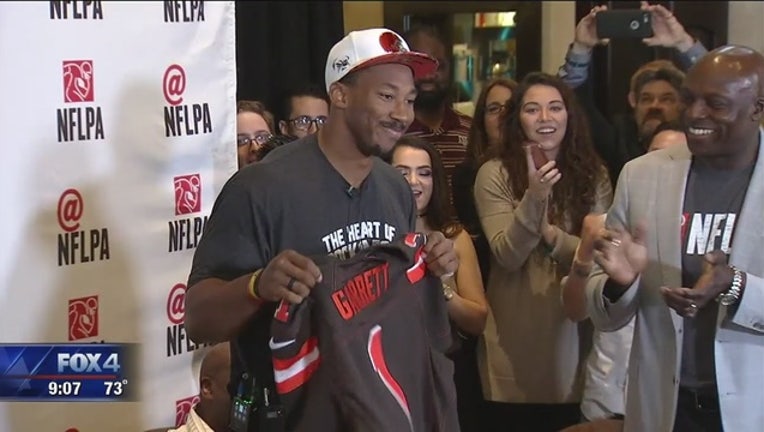 The rookie defensive end and No. 1 overall pick in the NFL draft has recovered from a foot sprain and will be on the field Thursday when Cleveland opens camp following a miserable 1-15 season.

Garrett suffered a left lateral foot sprain while rushing quarterback Brock Osweiler during minicamp in June. He was placed in a walking boot and there was some concern that he might be sidelined for an extensive period.

However, coach Hue Jackson said Wednesday that Garrett is "totally healthy" and will be on the field for the team's first workout. Garrett will be monitored during practices and it's possible he could be kept out of some drills.

"We will definitely monitor him but I think he's totally healthy, maybe hasn't done all the conditioning that you like to see right before training camp," Jackson said. "But I think he's up to speed and ready to go. And he's looking forward to it."

Garrett was limited by a sprained ankle during his junior season at Texas A&M, but he was still one of the nation's best pass rushers. He recorded 32½ sacks during three seasons with the Aggies.

Despite their need for a franchise quarterback, the Browns locked in on the 6-foot-4, 275-pounder and selected Garrett, who quickly impressed Cleveland's coaches and his new teammates with his speed off the edge.

But when Garrett collapsed to the ground during an 11-on-11 drill, it appeared his injury could be serious and yet another blow for the Browns, who have endured more than their share of costly injuries in recent years.

The fact that he'll be in pads and not on crutches is already a victory.

"I was super excited that he was OK," cornerback Joe Haden said. "When he went down, it was just ... injuries happen, but sometimes it seems like it happens to us even more. But I was just hoping that he would be able to be good to go."

Haden has kept tabs on Garrett and thinks the 21-year-old can have an immediate impact on Cleveland's defense.

"I actually watch Myles a lot just to see what he's got," Haden said. "The way that he can move, the way that he can bend, how big and strong he is, I can tell that that's something I haven't seen too much of and I think that he can be a really, really good force on the team. I just hope our team is able to go into this season healthy and ready to go because I know we have a lot of players that are just ready to get after it and ready to change what happened last year.

"Me, for one, so just hungry to get back out there and start playing."

Also, Jackson said Cody Kessler will begin camp as the first-team quarterback. Kessler, who started eight games a rookie in 2016, will compete with Osweiler and rookie DeShone Kizer for the starting job.