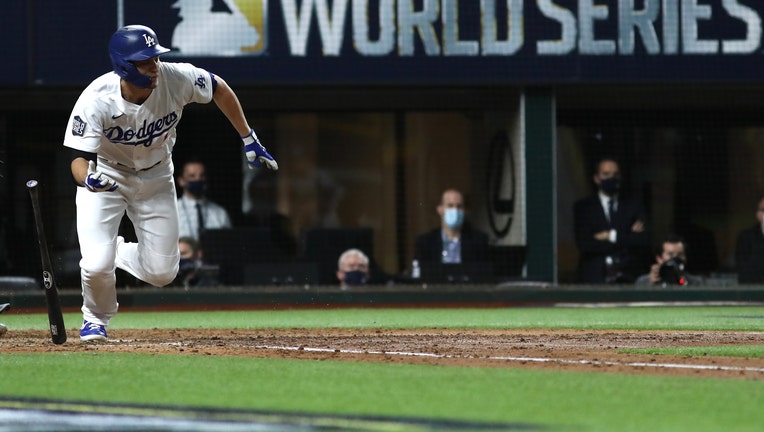 Corey Seager #5 of the Los Angeles Dodgers hits an RBI fielders choice to bring home Mookie Betts (not pictured) against the Tampa Bay Rays during the sixth inning in Game Six of the 2020 MLB World Series at Globe Life Field on October 27, 2020 in Ar

The Texas Rangers have reached an agreement on a $325 million, 10-year deal with shortstop Corey Seager, according to a person familiar with the deal.

The person spoke to The Associated Press on condition of anonymity Monday because the deal was pending a physical and wasn't finalized.

Seager was the World Series MVP in 2020 and a two-time All-Star in his seven seasons with the Los Angeles Dodgers. He hit .306 with 16 homers and 57 RBIs in 95 games this year, when he broke a finger on his right hand after getting hit by a pitch May 15 and missed 2 1/2 months.

The deal for Seager is the biggest in Rangers history, and matches Giancarlo Stanton for the fifth largest in overall value in baseball. The $325 million trails only the deals of Mike Trout ($426.5 million), Mookie Betts ($365 million), Fernando Tatis Jr. ($340 million) and Bryce Harper ($330 million).

Seager's deal with the Rangers came a day after Texas reached an agreement on a seven-year, $175 million contract with Gold Glove second baseman Marcus Semien, according a person familiar with that deal that was also subject to a successful physical.

After losing 102 games this year and going into the offseason having only $28 million committed to salaries for 2022, president of baseball operations Jon Daniels and general manager Chris Young had indicated they were willing to spend as needed and could be active in free agency to improve the team.

The Rangers have committed to more than $561 million in future salaries with four deals already ahead of a potential lockdown after the five-year agreement between MLB and the Major League Baseball Players Association expires at 11:59 p.m. EST on Wednesday.

Texas also has deals in place with right-handed starter Jon Gray for $56 million over four years, and outfielder Kole Calhoun for $5.2 million next season. Those deals have not been finalized or announced by the club.