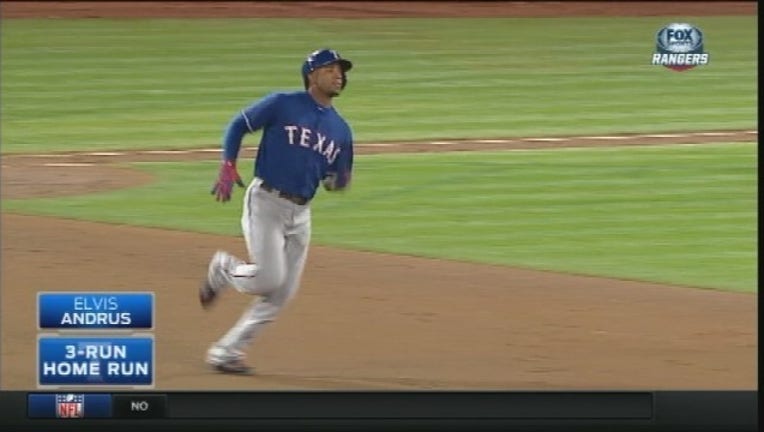 OAKLAND, Calif. (AP) — Elvis Andrus continues to tinker with his swing and its been paying dividends since the all-star break.

Andrus and Adrian Beltre each hit three-run homers in support of Colby Lewis' six strong and the Texas Rangers beat the Oakland Athletics 10-3 Wednesday night to take a three-game lead in the AL West Division.

Andrus was hitting .236 a few days before the break and that's when he began working with his swing.

"I'm not really trying to hit the ball hard," Andrus said. "I'm not trying to hit for more power, but I feel like I'm driving the ball and trusting my hands to be on time. I'm still developing my swing."

Andrus set a career high with his seventh home run. He has 41 extra-base hits, two shy of his career best three years ago. Andrus also has 59 RBIs on the year, eight away from his best.

Since his low just before the break, Andrus, who hit the first 3-run homer of his career, is hitting .288 and anchors a thriving lower half of the batting order.

"When he's patient, he has a lot of confidence," Rangers manager Jeff Banister said. "There are times he is too aggressive early in the count. The big thing is he's seeing the ball well right now and swinging the bat well."

Josh Reddick and Eric Sogard homered and Carson Blair drove in a run for the A's, who lost their fourth straight. Reddick committed two errors in the same game for the first time in his career. Sogard ended a 457-at bat homerless streak.

"You don't see very often a one-error night let alone a two-error night," A's manager Bob Melvin said. "There are times in your career that's going to happen but he went up his next at-bat and tried to get a good solid at-bat and hit the ball out of the ballpark."

"I can't say enough about what this team has done for me," Lewis said. "Elvis comes up with a huge 3-run homer and I was able to get comfortable. It seems the longer the season goes, the more fun it gets."

Felix Doubront (3-3), who started the season with the Toronto Blue Jays, lasted 4 2-3 innings, allowing seven runs on eight hits. He walked two and struck out four.

Billy Burns tripled with two outs in the fifth, which was the A's 41st triple, setting an Oakland record (40 in 1968).

Rangers: OF Josh Hamilton tested his sore left knee, facing live pitching and running the bases. "He moved pretty good on the bases," Rangers manager Jeff Banister said. "We'll see how he feels." Hamilton hasn't been in a game since Aug. 15. He did pinch hit a couple of times.

Athletics: C Stephen Vogt started at first base, his first appearance on the field since taking a hard foul tip off to his groin area more than two weeks ago. Vogt has been a DH and PH. He could catch again on Friday.

Athletics: RHP Chris Bassitt (1-6, 2.82) makes his first start in nearly month after recovering from a strained shoulder. His run support average as a starter is 2.15.