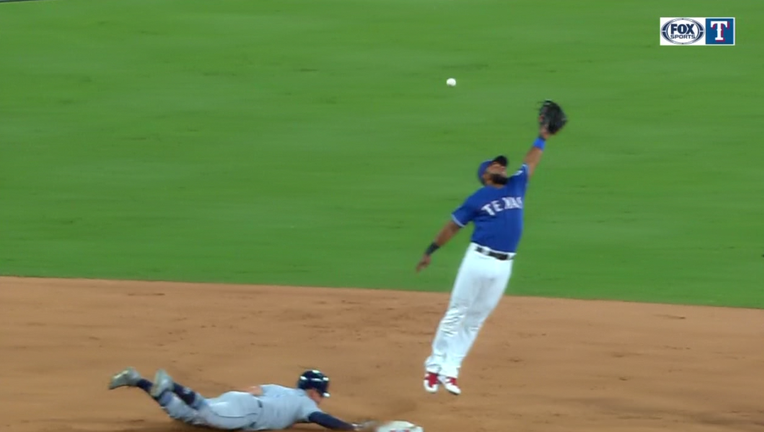 ARLINGTON, Texas - ARLINGTON, Texas (AP) — Austin Meadows tied the game with a two-run homer in the eighth, and Tampa Bay Rays scored twice in the 11th after two Texas errors on the same play in a 5-3 win Tuesday night that stretched their winning streak to six games.

Joey Wendle led off the Rays eighth with a triple off just-entered reliever Rafael Montero, and Meadows followed with his 29th homer to tie the game at 3-3.

Wendle's RBI single in the fifth was the only run Tampa Bay got in seven innings off Rangers starter Lance Lynn.

Emilo Pagan (4-2) struck out two in a perfect 10th before Peter Fairbanks worked the 11th for his first career save.

Fairbanks was traded from Texas to Tampa Bay on July 13 for rookie infielder Nick Solak, who hit a two-run homer in the fourth for the Rangers and had a two-out infield single off the pitcher he was traded for in the 11th.

The Rangers didn't have a base runner against lefty starter Ryan Yarbrough until Shin-Soo Choo was hit by a pitch leading off the fourth. Choo came home an out later when Willie Calhoun lined a double into the left field corner, and Solak followed with his third homer in his 20 games since his big league debut Aug. 20.

Those were the only three runs allowed by Yarbrough, who struck out seven and walked one in seven innings. The lefty hasn't lost in his last 15 appearance (seven starts) since early June.

Rays: CF Kevin Kiermaier thought he would be back in the lineup, but manager Kevin Cash held him out after he left the previous game Sunday with a stiff neck. An MRI showed no issues. "Necks are very tricky. And when you have a stiff neck, sore neck like he does, it affects every little movement," Cash said. ... LF Tommy Pham was also out with a forearm/elbow issue. He could return Wednesday, maybe as the DH. ... LHP Blake Snell, out since July 22 because of surgery to remove bone chips from his elbow, is scheduled to go two innings or 30 pitches for Triple-A Durham in Game 3 of the International League championship series Thursday. His first rehab start was Saturday in the semifinal series clincher for the Bulls.

Rangers: All-Star slugger Joey Gallo, who last played July 22 before right wrist surgery, took some swings against live pitching. Manager Chris Woodward said Gallo looked fine and felt decent. The hope is that Gallo can play a few games before the end of the season. "He's had such a good year and he's made so many strides forward, I'd like to send him off with something positive he did on the field, not out of the training room," Woodward said of Gallo, who has hit .253 with 22 homers and 49 RBIs in 70 games.

Both teams could start the middle game of the three-game series with relievers. The Rangers have used an opener in front of Ariel Jurado in his last two starts. The right-hander has allowed 27 runs (21 earned) his last 23 2/3 innings.