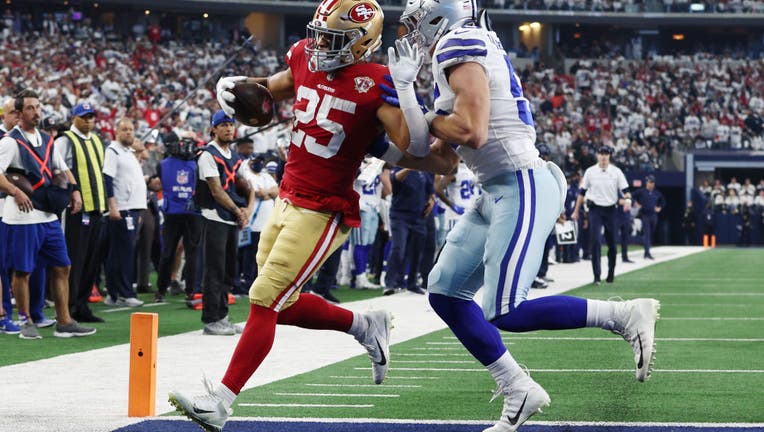 ARLINGTON, TEXAS - JANUARY 16: Elijah Mitchell #25 of the San Francisco 49ers rushes for a touchdown past Leighton Vander Esch #55 of the Dallas Cowboys during the first quarter in the NFC Wild Card Playoff game at AT&amp;T Stadium on January 16,

ARLINGTON, Texas (AP) - Versatile receiver Deebo Samuel ran 26 yards for a touchdown the play after an interception by Dak Prescott, and the San Francisco 49ers held on for a 23-17 wild-card victory over the Dallas Cowboys on Sunday.

The Cowboys had a final chance with 32 seconds remaining and were at the San Francisco 41 with 14 seconds to go when Prescott took off up the middle intending to slide and spike the ball for a final play.

But Dallas didn't get the snap off from the 24 until after the clock hit 0:00. After a brief delay, referee Alex Kemp announced the game was over.

The 49ers overcame an interception by Jimmy Garoppolo when they led by 13 in the fourth quarter. Prescott ran for a touchdown to get within a score, and had a chance to drive Dallas to a go-ahead score. But the 49ers got a stop at midfield when Prescott's desperation fourth-down pass was just out of the receiver Cedrick Wilson's reach.

After a 14th penalty from the NFL's most-penalized team in the regular season that helped San Francisco run out most of the clock -- and the frantic final seconds as Dallas tried for the win -- the 49ers (11-7) clinched their first playoff victory at the Cowboys in a storied postseason rivalry.

Now they head to Green Bay for a divisional game, looking for another trip to the NFC championship game.

"It was like the whole day, it really was," Garoppolo said of the final sequence. "It was a dogfight, hell of an atmosphere out here. I mean, the fans were nuts. It was everything we thought it was going to be. It was fun."

The wait for Dallas (12-6) to get that far in the playoffs will reach at least 27 years after another first-game flameout in the postseason for Prescott, the second in three trips for the star quarterback. It was his first playoff game since signing a $40-million-a-year contract in the offseason.

The 49ers were in control in the fourth quarter, but not leaning on the running game they figured could carry them to a win when Garoppolo threw an interception to Anthony Brown that set up Prescott's 7-yard scoring run. 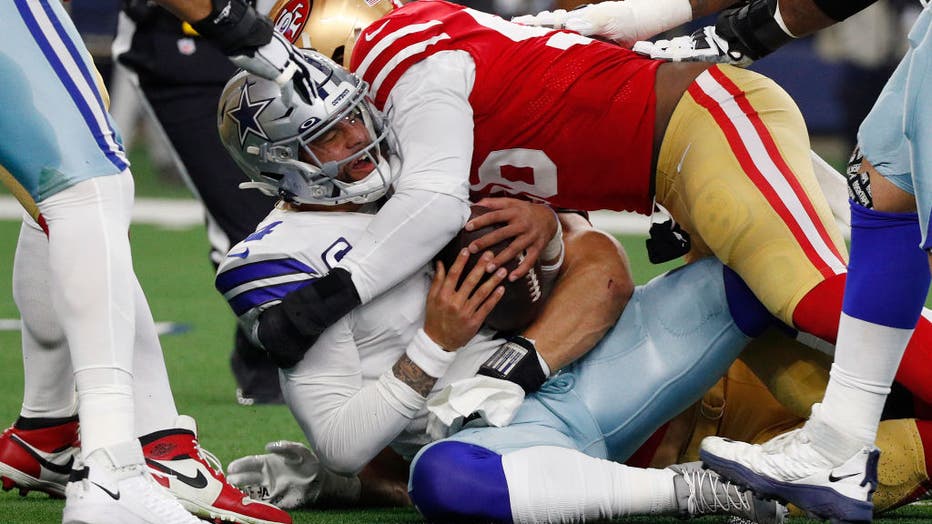 ARLINGTON, TEXAS - JANUARY 16: Samson Ebukam #56 and Nick Bosa #97 of the San Francisco 49ers sack Dak Prescott #4 of the Dallas Cowboys during the first quarter in the NFC Wild Card Playoff game at AT&amp;T Stadium on January 16, 2022 in Arlingt

Garoppolo's mistake wasn't long after Prescott was picked off at the Dallas 26 by K'Waun Williams and Samuel ran untouched on a cutback up the middle to the end zone on the next play for a 23-7 lead.

San Francisco lost star pass rusher Nick Bosa to a concussion just before halftime when he was crunched in the head and neck area by teammate D.J. Jones. But the 49ers kept enough pressure on Prescott, finishing with five sacks while holding the NFL's No. 1 offense to 307 yards.

"Guys just stepping up big in big key situations, that's really what it was all day," Garoppolo said. "Early on, we got it rolling with the offense and the defense just throughout the entire day. We got some dogs on our defense, man. It's fun."

The Cowboys had all three timeouts after Prescott's desperate pass to Wilson fell incomplete.

The 49ers got a first down on the second holding penalty by a Dallas defensive lineman on a running play, and Samuel got all but a few inches needed for a first on a third-and-11 run with a minute remaining.

Gould is now the career leader for makes in the playoffs without a miss at 18. Two of his field goals were from at least 50 yards (53, 52).

Concussions almost sidelined the best pass rushers for both teams. Before Bosa was injured, standout Dallas rookie Micah Parsons left in the first quarter. He was evaluated and returned.

49ers: Head to Green Bay to take on Aaron Rodgers and the Packers in the divisional round.

RELATED: Cowboys get no advantage being home with another playoff loss